Legal and Scholarly Analysis and Commentary 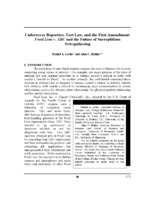 "The Media's Intrusion on Privacy: Balancing the Rights of Privacy and the Press: A Reply to Professor Smolla" – Erwin Chemerinsky – The George Washington Law Review

"The Media's Intrusion on Privacy: Privacy and the First Amendment Right to Gather News" – Rodney A. Smolla – The George Washington Law Review

"Deception is an illusive and difficult issue. The inverse of deception is truthfulness, which is perhaps the closest to a universal value that we have. Deception is objectionable, but this moral outlook is complicated by the systematic nature of deception in human relationships, from little white lies in social intercourse to the far more capacious deception in international relations or warfare. . ."

The seeds of public distrust were sown long before the recent round of scandals.

". . .At the same time women were writing about domestic matters, newspapers began to employ them to create another kind of journalism: tales of social abuse and crime that boosted newspaper circulations in the era of Hearst and Pulitzer. Pulitzer's 'New York World,' the paper that employed 'Jennie June' to write its women's page, also hired 'Nellie Bly.' Bly, whose real name was Elizabeth Cochrane, became the first internationally-famous female journalist with her round-the-world race in 1980, beating a female reporter from a rival Hearst paper. . ."

"Youth on the Road: Reflections on the History of Tramping" - Judith Adler - Annals of Tourism Research

". . .In the first third of the twentieth century, 'the road' still played a part in the life of thousands of young people, but the literature on such youth travel consistently examined it as a form of juvenile delinquency, rounding off the narrative with proposals for rescue and resettlement. . ."

Tramp Ethnographers and Narratives of Class in Progressive Era America

". . .This essay focuses on how these social investigators made sense of what they perceived as the troubling actions of unskilled male workers. Throughout the Progressive Era (roughly 1880-1925), middle-class intellectuals counted, classified, photographed, and otherwise examined the lives of working-class people. . ."

". . .In 1904, the Muckraker journalist, Upton Sinclair, went undercover as a meat packer to expose conditions in the Chicago slaughterhouses. His findings, documented in The Jungle, provided impetus for adoption of federal food and drug legislation

". . .The author of 'The Great Auction Sale,' Mortimer Thomson, better known by his pseudonym, Q.K. Philander Doesticks, P.B., a writer who was one of the most popular American humorists of the 1850s, previously had published five books—all with a humorously satiric thrust: 'Doesticks: What He Says,' a burlesque of many facets of New York City life in the 1850s; 'Plu-ri-bus-tah, A Song That's By-No-Author,' a poetic burlesque social history of the United States parodying the trochaic metrics of Longfellow's 'Hiawatha'. . ."

"Deception in Medical and Behavioral Research: Is It Ever Acceptable?" - Dave Wendler - The Milbank Quarterly

". . .For this reason, and in spite of the widespread unanimity regarding the importance of subject autonomy, the question remains, is subject deception in research ever ethically acceptable. . .?"

"The essence of theater is deception. Actors assume various roles to inform or entertain the audience. Frequently, theater takes deception to a second level, in which characters assume false identities or feign loyalty for various purposes. Sometimes such artifices are employed to uncover truths that others seek to keep secret."

". . .This case brings up the almost impossible balance that must be achieved between the press' rights, the public's need to know, and a business' right to privacy. Should reporters be allowed to lie about who they are and what they are doing to get a good story? How far is too far? Where should the line be drawn between acceptable and unacceptable newsgathering practices. . .?"

"Undercover reporting and aggressive elbowing for position to be where the news is happening have been accepted components of journalism for decades. They have produced memorable news accounts and sometimes prompted legislation to remedy abusive activities by the subjects of the news reports. Upton Sinclair and Nellie Bly have become icons in the history of undercover or anonymous newsgathering."

"Deception, by which we mean words or conduct intended to induce false beliefs in others, plays a complex role in human life. Well-socialized people revere honesty and disapprove of lying and other forms of deception. At the same time, well-socialized people engage in deception, regularly and skillfully, not only for altruistic reasons, but also to gain advantages over others."

". . .Some years back they were given the name muckrakers, as a term of derision. Far from being shamed or deterred, however, they began to wear their title as a badge of honor and to engage more actively and vigorously in exposing corruption, oppression, abuse of authority, and other kinds of wrongdoing. . ."

"What became FM began as an assignment for Fortune magazine, luxurious track record of the noteworthy rich, with Agee and Evans traveling to Alabama in search of an article on tenant farming. Neither Agee nor Evans felt comfortable with what Agee called this "curious" arrangement, and so from the beginning publication—in any form Fortune could use—seemed only a distant possibility. The magazine had in fact considered a similar proposal several years earlier by photographer Horace Bristol and John Steinbeck, but Steinbeck eventually vetoed the arrangements due to Fortune's clear and shameless celebration of capitalist ideology (Sacramento Bee. April 5, 1989), a style in direct contradiction to the spirit of the project."

"The Morals and Manners of Journalism" - Richard Grant White - The Galaxy

". . .The highest honors of journalism are taken by him who is at once a writer and an editor of marked ability. To that position every man aspires who makes journalism his profession, whether he is incited thereto by thought in his brain and a purpose in his heart, or whether he merely desires power and profit, the profit that always waits on power. . ."

"Moral Guardians and the Origins of the Right to Privacy" - Jeffery A. Smith

". . .Before the rise of sensational journalism in the 1830s, newspapers were often celebrated as informative and socially beneficial vehicles of enlightenment. Later assessments of the press frequently found some kinds of subject matter distinctly improper. . ."

"Newsgathering and the First Amendment: Toward a Progressionist Theory of Constitutional Interpretation" - Erik F. Ugland

". . .During the past three decades, news organizations have sought to broaden the definition of press freedom to include protections for newsgathering. Journalists and their advocates have argued that if they are to serve the highest purposes of their profession, freedom of the press must encompass more than their right to publish what they know; it must also protect their pursuit of the unknown. Media lawyers have thus sought judicial acknowledgement of the right of journalists to attend judicial proceedings; to access government records; to monitor activities in federal prisons; to break promises with their confidential sources without being sued for damages; to be protected against tort claims targeting theirnewsgathering activity; and to be exempt from prosecution for certain crimes committed in their pursuit of news. . ."

"In their pursuit of newsworthy stories, television journalists often invade theprivacy of their news subjects. When they enter private property or reveal private facts about individuals, reporters tread a fine line that may ultimately subject them to trespass and other privacy torts."

"Establishing constitutional malice for defamation and privacy/false light claims when hidden cameras and deception are used by the newsgatherer" - David A. Elder, Neville L. Johnson and Brian A. Rishwain - Loyola of Los Angeles Entertainment Law Review

". . .A hidden camera story is essentially a 'grainy little morality play,' edited to heighten the entertainment value, where journalists go undercover to mythologize their work by becoming protagonists, modern, 'folk heroes' who ferret out wrongdoing as the superheroes of pop culture. . ."

"In journalism, with its emphasis on pursuing and publishing the truth, deception strikes at the heart of the profession. Truth telling, the inverse of deception, is a universal value and a fundamental given in the communications field. Journalists are expected to tell the truth, but in what appears to be a paradox, they may have to deceive to get the truth."

Many journalists, readers and scholars exhibit confusion concerning the nature and justification of deception.

"Deception has been a tool of effective and award-winning reporting since 100 years ago when Nellie Bly went undercover to expose corruption in industry and government. It has also been a practice that has created additional distrust for journalists, who are already suffering from credibility problems."