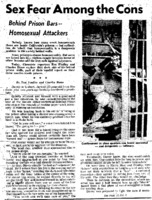 San Francisco Chronicle prisons investigation involving undercover as a prisoner by Tim Findley and as a guard by Charles Howe.

"They call it 'The Campus' and at first glance California's only prison for women does look like a teacher's college in some suburb. But the 655 women doing time at the California Institution for Women near Chino, it is a place of confinement. . ."

"California has 13 penal facilities that house rhw majority of the 24,000 men and women convicted of major crimes. Aside from China and the Soviet Union, California operates the largest prison system in the world. . ."

". . .Cal McEndree, the blunt-talking "Program Administrator" of the two wings was sent to Soledad last year by State Corrections Director Raymond Procunier in what was understood by most to be an effort to clean up the violent reputation of Soledad's adjustment center.  Since he has been there, McEndree, widely respected by inmates for his firm, but straightforward and honest manner, has let more men out of Soledad's "hole" than had been thought possible a year before. There is some belief among observers that McEndree may even succeed in closing down at least half of the adjustment center within the next year. . ."

". . .To save money, Soledad Central was built along the contours of the gently sloping green fields of the Salinas Valley.The main corridor thus drops in a long graduated stairsteps and from the east end literally looks like an endless tunnel with only a pinpoint of light showing from the low end where the corridor opens into the big yard.Superintendent Cletus J. Fitzharris calls the corridor "a quarter mile of madness."About 1500 men live on their side of it. It is their only thoroughfare to everything that comprises their world for as long as a lifetime. . ."

"A free man in free man's clothing, because the authorities feared for my safety as an inmate, I lived in Soledad for a week - not a true prisoner, but as much a captive of the mind-smothering machine as the 3000 people who live and work there. Prison is never as simple as the tin cup tantrums and zoo cage loathing people insist on visualizing. . ."

Men Who Shouldn't Be There

"Throughout California a number of dedicated men and women in and out of the Department of Corrections are quietly working to reduce the state's prison population by at least half. Here are some of their conclusions:  The amount of time a man serves behind bars has no relation to whether or not he will fail in the streets and be returned to prison.   Men convicted of property crimes - as opposed to violent crimes - never should be sent to prison. . ."

". . .Richter had been out of prison for seven months and he hadn't been able to find a steady job. He sat in his small, neat Mission District room and he twisted his fingers. 'I've got to get to work, you see. I've got to make friends. There's this girl upstairs I'd like to take to the movies.' He reached in his pocked and extracted a coin. 'I can't take her anywhere on a dime.' He looked at his feet. 'You don't know what it's like to be lonely and without work. If it keeps us like this, I know I'm going back in the joint' . . ."

". . .The violence remained centered in the mammoth east block of the prison, scene of five other knifing incidents within a 24-hour period Monday and Tuesday. Despite the attacks, about 1600 men from two cell blocks were allowed out of their cells yesterday in the 3200-inmate prison, and authorities said those men would remain on an 'unlock' status unless trouble developed among them. . ."

". . .Robert Thompson, the head of Vacaville's reception center, sees the problem this way: 'These men,' he said of Fred and his comrades, 'have failed at everything they've ever done. They failed in school; at their marriages; at raising their children; in the Armed Forces. And the fact they are here indicates they failed at crime' .  . ."

". . .Fred Crocker, wearing a suit of whites with a belly chain secured to his waist, stepped out of a sheriff's van last week and walked into the recesses of Vacaville Medical Facility. A fat youngster, who admitted he had been impersonating an ambassador of another country. Fred was arrested in a northern county on charges of forgery after he tried to hand a bogus $200 person check on a jaded bartender. Croker's case was relative fare at Vacaville, where felons from 47 of California's 58 counties are first sent (the rest go to Chino, outside Los Angeles), in that he has never been to the penitentiary before. . ."

". . .Officer Robert J. McCarthy, 43, was the eighth man, including three officers to be killed at Soledad in the past 13 months. Hugo Pinell, 26, an inmate convicted of rape in San Francisco in 1965, and currently serving a life sentence for attacking a San Quentin correctional officer in 1968, was being questioned yesterday by Monterey country district attorney investigators. . ."

". . .Suppose you became a felon - a convict - and they processed you through the incoming prisoner facility at Vacaville, stamped your name and number in an indelible file and sent you off to prison. What kind of place would you want it to be? How about a neat little retreat in the Tehachapi Mountains 4000 feet high at the end of a soft idyllic valley where you wear your own clothes, spend three days alone with your family every 90 days, live with other men in a dormitory like the one you had in college, vote on important issues like how late you can beat your drum at night, make your choice of learning one or more of 19 trades, complete your education, and rarely see a uniformed "guard?" It would still be prison. . ."

The Men Without Hope

". . .California prison officials have an annoying habit of putting together two-syllable words to describe a one-syllable mess. Prisons are "correctional facilities." Guards are "correctional officers." And what inmates and staff alike most often refer to as "the hole" is officially known as "the adjustment center." Prison in California is like the descending levels of Dante's hell, with the adjustment center almost, but not quite, at the bottom. . ."

Cons Get It Together

". . .Mulligan sat alone in his cell in San Quentin's B-Wing, a place of isolation for violent and recalcitrant prisoners. Inmates call it "the hole." Mulligan is only 23 years old, a convicted burglar with a long history of petty crimes behind him. Relatively passive on the streets, we could have been out long ago - if he had not violently resisted The System while inside prison. Mulligan has a swastika tattooed on his forearm - the one covered with self-inflicted wounds from a razor blade. Mulligan says he is a 'Nazi' . . ."