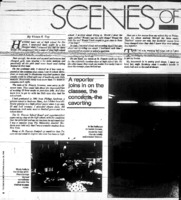 The young reporter Vivian S. Toy's infiltration of a Milwaukee high school in her guise as a student resulted in this multipart series in 1986.

The reporting was intended for these media types: Magazine, Newspaper

"There are the 'druggies,' who do drugs, and the 'freaks,' who do drugs and drink."Jocks, of course, are the athletes, and 'frocks' are jocks who happen to be freaks. . . ."

III-"Stepping Back: Still a Stranger In Their Midst" - Vivian S. Toy - Milwaukee Joural

Students Wary of Principal; Most Teens Shun Drugs at School; But Dealers Are Widely Known and Do Business in the Open

"The new principal at St. Francis High School stands in the lobby at the front of the stairs before school, after school and between classes. . .. "

A Look at High School in the '80s/ Where There's Smoke: Teenagers Sneak Cigarettes Despite School's Warning/ Grab a Pen, Gid Rid of That Gum - And Don't Be Tardy

"It's three minutes before English class starts, and the boy is in a panic. He has forgotten to read the assigned lines in 'Beowulf,' and he hasn't answered the questions."He turns to a friend for help, and she's glad to give him the answers. Sure enough, he's called on in class, but he has the answer. As the teacher turns to something else, the boy breathes a sigh of relief and whispers a "thanks" over his shoulder to his friend. . . . "

"Having been out of high school for five years, I suspected there might be a few changes when I returned htis fall for three weeks . . . Sure enough, the styles and musical preferences had changed, girls were wearing a lot more makeup and practically all the girls (and some boys) used styling mousse in their hair."On the academic side, it seemed as if less were expected of the students than when I was in school. Questions on tests and in classrooms required answers that usually could be lifted right out of textbooks with little analysis . . . "