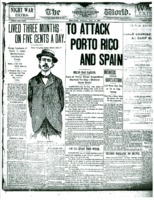 A New York Evening World series by Charles Garrett and Catherine King as they lived in total penury, looking for work, in New York City.

Mr. Garrett's 4th Chapter on His Hard Experience in New York Living; He Does His Own Laundry; News from Papers Picked Up in the Parks -- Wisdom Gained from Accidents -- What He'll Tell To-Morrow"

". . . I was getting to the end of my small stock of cash and was beginning to wonder where the next money was coming from when my troubles were added to by an accident. To many people it would have seemed most trivial, but in the condition of my finances, it was a serious one. . . . "

Mr. Garrett Goes on Showing How He Found It Possible but Often Very Painful; Gold Collar Button, 1 Meal; The Narrator Mends His Own Shoes -- Sells a Story, Good LUck, and Hears of a Sick Mother, Which is Grief.

"I had been down in the five-cent-a-day basin for some time and was vibrating between that and the two or three cent a day allowance of mush and coffee. . . . "

Evening World Woman Reporter Seeks Work at Living Wages; Catherine King in Department Store; Treated Kindly by Everybody, but the Hours Are Long and Pay Small for Beginners

"I started out early one morning to find work as a shopgirl. It has always seemed to me that there must be plenty of opportunities in the big stores for women and girls who are willing to work. . ."

Catherine King's Second Trial for a Place Was a Big Restaurant; Adjured Not to Loaf; She Learns How to Fill Mustard Pots and to Balance Big Tray of Dishes

"Clearly I was not intended for a shop girl. One day's experience had proved this. I turned my attention in other directions. 'Why not become a waitress?' said I to myself. So I resolved to try to secure a position in some downtown restaurant. . ."

Catherine King Works in Stylish Modiste's as a Beginner; Little Pay for a Year's Work; Fixes Society Woman's Gown at Redfern's and Sews with the Tired Workers

"I have been not exactly among the singers of 'The Song of the Shirt,' but nevertheless in the place and the atmosphere of a wearying 'stitch, stitch, stitch.' I have followed up my one day's work in a department store and my other day's work as a quick-lunch waitress with a brief experience as a dressmaker at Redfern's. . ."

Catherine King Does Not Find Them to Be the Most Encouraging; The Women's Rebuffs Hurt; A Tip on Working Office Buildings, Despite Rules, but It Didn't Work for Sales

"I had tried several ways of earning a living and had found none that would have brought me enough to even settle my board bill, had I been in real distress. I felt that I must find something. Other women reduced to financial straits manage to earn a living somehow and I must do the same. I searched again the advertisements in the papers and found that although there was plenty of work offered for women, most of it required special training. . ."

Catherine King Works in a Big Mercantile House on Broadway; The Buyer and His Luncheons; Girls Must Have Fine Figures and Wear Garments So They Sell Readily

". . .All I knew about work as a cloak model was that one had to be possessed of a good appearance and a figure measuring so many inches about the bust and waist. But in order to find out exactly what the work was and exactly how a woman could earn a living in this field I picked up the Sunday World and read the following advertisement: 'Wanted- A young woman to try on suits and jackets; must be 34 bust. Apply tomorrow morning' . . ."