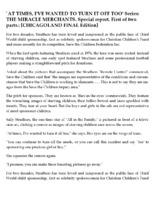 The Tribune reports on the experiences of a group of staffers who among them sponsor a total of 12 children through "four of the largest and best-known child sponsorship organizations - Save the Children, The Christian children's Fund, Children International and Childreach."

I-Miracle Merchants: "At Times, I've Wanted to Turn It Off Too" - Graeme Zielinski and David Jackson - Chicago Tribune

"The pitch for sponsors. They are known as "flies-in-the-eyes" commercials. They feature the wrenching images of starving children, their bellies bowed and faces speckled with insects. They tear at your heart . . ."

". . .The Tribune found that the notion of individual child sponsorship exists primarily as a marketing myth. Costly, time-consuming and hampered by the logistical difficulties posed by some of the poorest and most remote places on Earth, child sponsorship succeeds far better as a fundraising engine than it does as a vehicle for providing benefits to the children whose faces sustain it.Child sponsorship agencies vigorously defend their approach, maintaining that their donors clearly understand that money does not go to benefit individual children, but to the broader community in which the children live. . ."

"Years after a boy's death, an American family still received messages from Abdoul Kone, the child whom they had sponsored. Their case shows how donors can be betrayed by the sponsorship system.As they had been in previous years, Clover and John Dixon were delighted to receive a 1996 New Year's greeting from this West African village. For nearly six years, a boy from Mali named Abdoul Kone had occupied a special place in their Bellingham, Wash., family, his photograph posted on the refrigerator door and his letters handled with loving care. . ."

". . .But when the Chicago Tribune sponsored two young boys in the African nation of Mozambique, they found that child sponsorship as depicted by Save the Children is a myth: As Save the Children executives later acknowledged, there is no guarantee that a sponsor's dollar will ever reach that sponsor's child, and no way of knowing whether it ever does. . ."

"The Tribune's sponsored children in Africa did not fit the streotypes or even understanding the concept of being sponsored. For these two boys, the images presented to their sponsors didn't match the reality of their lives. Sponsored? News to him. Salvador Nhabangua does more than teach lessons in the crowded, open-air classrooms of the village school in Zongoene, Mozambique. He writes letters to America.Flashing a broad smile, the 44-year-old teacher cheerfully admits he composes most of the letters that purport to come from children in his classroom, who are among the 216 sponsored through Save the Children Federation Inc. in this farming community overlooking the Limpopo River. Nhabangua takes pride in the task. Unfortunately, he doesn't always take the time to discuss the letters with the children before he writes them. He says that an SCF staffer pays him $5 to $10 a month on an informal basis to write the notes. . ."

". . .When the Tribune asked the organizations to support claims of having a global impact on child survival, education and longevity, they offered anecdotal accounts of improving vaccination rates, increasing the use of contraception and improving nutrition at the community level.They could not provide evidence that conditions in countries where the sponsorship groups are working have improved much more than in other countries. . ."

". . .Childreach marketing director Stacey Pulner Mihaly acknowledges that the stories of the children's lives were composites drawn "from the histories of many children." The pictures were randomly selected from Childreach's photo archives, Mihaly said, and the children's names were simply made up. . ."

". . .Because child sponsorship had failed him. Despite a sponsorship through the Rhode Island-based agency Childreach, the boy could not pay his school tuition.Pierre Richard is just one of thousands of children sponsored through Childreach, which tells its donors their money will make big differences in the life of their sponsored child. . ."

". . .While the language sometimes varies, the 35,000 figure has appeared repeatedly in recent years, in television and print solicitations by several child sponsorship organizations. . ."

"Work on this project began in 1995 when a group of Chicago Tribune reporters and editors initially sponsored 12 children through four of the largest and best-known child sponsorship organizations--Save the Children Federation Inc.; the Christian Children's Fund; Children International; and Childreach."Over the next two years, the individuals sent monthly or annual donations to the children who were randomly selected by the organizations. Tribune reporters and editors didn't request specific children, although some said they preferred children on certain continents in order to research a wide spectrum of charity work. They identified themselves by name but not by their affiliation to the Tribune. The charities didn't ask for information about employment or occupation in donor applications.

". . .To some of those the charity promised to serve, that remains an open question.The fund's colorful annual reports list the tangible advances made by its most successful projects around the world, highlighting the aqueducts that bring water to some 240 Colombian families and the grant that gave Gambian doctors 250,000 doses of meningitis vaccines for children. CCF was among the first child sponsorship agencies to stop giving handouts to residents of developing countries, because it found that method of philanthropy fostered dependency and invited employee fraud. . ."

"A coalition of private relief and development agencies is about to release new rules designed to intensify outside scrutiny of the child sponsorship industry and ensure that children actually receive benefits promised in advertisements soliciting donations. . ."

". . .The Tribune's yearlong examination of four leading sponsorship organizations--Save the Children, the Christian Children's Fund, Childreach and Children International--found that several children sponsored by Tribune reporters and editors received few or no promised benefits. A few others received a hodgepodge of occasional handouts, such as toothpaste, soap and cooking pots. Some got clothing and shoes that frequently did not fit. Sick children were sometimes given checkups and medicine, but not always. . ."

Save the Children Redirects Staffers to Closely Monitor Individual Cases

". . .But the increased activity is part of more aggressive reforms launched by Save the Children Federation Inc. (SCF) in the wake of a yearlong Tribune investigation that exposed serious problems within Save the Children and other child sponsorship charities, ones that raise millions of dollars annually through heart-tugging appeals asking donors to sponsor a needy child for a few dollars each month.The Tribune special report, published in March 1998, revealed that Save the Children had some of the worst problems in the industry. Among other things, the organization took money from donors to sponsor children who were dead and falsified correspondence to American sponsors from African children, including at least one who had died. . ."