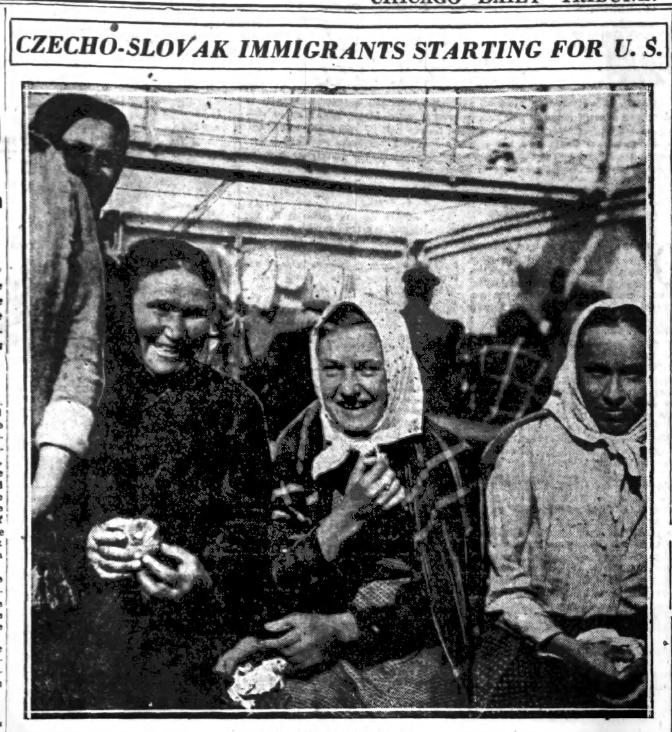 Genevieve Forbes Herrick with the Chicago Daily Tribune posed as a young Irish immigrant girl and "had some remarkable experiences in Ireland and in the steerage before she ran the gantlet of all the terrors of this great American gateway to the United States. She is disclosing what she and her fellow immigrants endured to enter this country. Miss Forbes' experiences bear out fully the charges made against Ellis Island."

From emigrant to immigrant. The transition is more fundamental than a change in spelling. Less than three weeks ago I, a "greenhorn" Irish girl, dressed in a homemade blue suit, a bow of green ribbon in the buttonhole, a green felt hat and heavy Irish clogs, leaned out of a third class carriage at Wexford, County Wexford, Ireland, and waved good-by to the group of friends who wished me good luck in America, the promised land, whither I was going to get a "job with my girl friend."

"'And the longer you stay away from Ireland the better Irishman you are,' is the somewhat ambiguous motto of the wizened old man who sits next me in the third class railway carriage on the way to Wexford, county Wexford, Ireland. He follows up this Irish bon mot with the explanation that he is returning to his home after an absence of thirty-five years in the coal mines of Wales, that Ireland is a 'grand country,' and -- but, of course, the conversation turns to politics."

Erin Is A Land Of Manana For Emigrants: British and Irish Red Tape Delays Them

"If 'twere done, 'twere well it were done quickly," is an axiom that cannot be applied in Ireland. So, between my determination to leave Wexford for america and my actual departure there is a long interval, made doubly long by doubts, disturbing stories of difficulties likely to befall me, and fear of the demands made by 'red tape.'"

Old and Young of Ireland Seek American Haven. Troubles Are Many Before They Sail.

By the time our little group reaches Dublin we have enlarged it to include several more bound for America. There is Bill, the handsome New York policeman who has been home for a visit in Limerick. And Mar McGinn, with gorgeous red hair and "a hairy" coat. Mr. McKee hastens to tell us he has. been working eight years in a Detroit automobile factory. Of course, he is authority on everything.

"On Board Ship, At Last, On Way to Ellis Island" - Genevieve Forbes Herrick - The Chicago Daily Tribune

'On Board Ship, At Last, On Way To Ellis Island: Smiles and Songs From Emigrants at Sailing'

Lack of education, what excuses are made in thy academic name. The rejected immigrant, loath to admit disqualification on the score fo morals, cleanliness, or health, prefers to blame all his troubles on inability to read and write. As a result, when we go to the inspector's office at Queenstown, we find an inconsistently large group of 'literate illiterates.' We all know the subterfuge, but we play the game, not so much through loyalty as through fear lest it may also be our game.

We hate them as we love them, our fellow passengers in the steerage, which is the first indication that 'they' over whom first cabin travelers sentimentalize, has become the 'we' of our own circle. I, with five other girls from Queenstown, spend a sleeplessly sleepy night in a stuffy cabin with almost no ventilation. Up at 6:30, we hurry to breakfast, for we are at the first sitting. This is due, in part, to the difference in food for the Jewish groups, who compromise much of the continental delegation, in part to the protest made by the English speaking passengers for preference.

Insults Heaped On Immigrants At Quarantine: Women Are Cursed and Mauled at Inspection

"Crowded quarters have the advantage, if such it be, of sociability. By the third day of our trip we have learned a few statistics; eighty-eight children, a bride and groom, two patriarchs from Russia (if length of beard be any criterion), a London actor, a theological student from South Africa--we are as diversified as a ringside audience."

'of course they've got to have rules, but why can't they treat us as if we were decent when they enforce them?' asks a little English girl, between sobs, as she puts on her clothes after inspection at quarantine early Monday morning. Compelled from infancy to obey laws and to observe rules, we even some of the most rebellious or stupid of us, have left our native countries believing in the necessity of strictly enforced regulations. But when we see, at the threshold of our new home, petty officials using a bit of gold braid, a uniform, or a subordinate title as a means of insulting women, shaming girls, frightening children, and infuriating men, we cease to reason and begin to argue emotionally, often hysterically.

Guards Gloat Over Miseries of Immigrants: Mix Indecent Jest with Oaths of Command

"'Damn you, you're in America now, get in line, d'ye hear? You're in America,' screams the illiterate, uncouth foreigner in charge fo the tender for Ellis Island, as he shoves us, a confused and stumbling mass of men, women and children, on to the upper platform of the ferry. About a third of our number get seats, the rest of us stand; crowded together in the narrow and dirty passage between the staircase and the benches. The floor is filthy."

Women Herded As Are Cattle At Ellis Island: Crowded, Driven, Sworn at by Guards

"'All women and children ashore.' Down the narrow stairs we stumble, an emotionless, hesitant, frightened mass. And always the raucous voices of our two guards, hurling brusque ruthless, often profane commands at us. Even the women who have been most self-possessed are shaking. 'if my husband were here,' whispers one of the women, ' he'd punch that man, even if he had to go to jail for it.'"

Rude Answers, If Any, The Rule At Ellis Island: No Effort to Cheer Way of Immigrants

"As we climb the stairs we catch glimpses of cages and bars. Self-important officials, holding their jobs because there is an Ellis island, yell and scream at us because we are at Ellis island. The noise is deafening; the procession incessant. At last we aer shoved into a large room with rows of benches, each marked with a different number and accommodating about 100. At the end of each bench is a raised platform and a desk before which an inspector is supposed to sit."

"'And What's more, we don't need you to butt into our affairs,' is the way the chief inspector shows his approval of my humble and in the beginning, quite unargumentative efforts to help the five girls who have ben forbidden to telephone or telegraph relatives waiting for them while they are held at Ellis Island. The authorities will not release them until their relatives come to claim them; their relatives won't come until the girls notify them; the officials forbid the immigrants to communicate with the outside world. It seems an endless circle. I intimate as much to the inspector."

'Helpless' Find Ellis Island is 'Hard Boiled': 'Why Not Report Us to Senate?' Is Asked

"After my 'forcible release' from Ellis island, I return the next day as an American citizen to see if I can gain protection from the American eagle. I learn that inasmuch as most of the people calling at the island to claim relatives or friends are without influence, money or position, the major 'minor' officials treat them as much as they treat the immigrants. We go first to the information desk, make inquiry, and receive a pass. We are then shoved into a large 'bull pen' enclosed with a high wire fence and guarded by impudent youths, who order us about, ignore our questions, and refuse us any accurate information."

"W.W. Husband, commissioner general of immigration, came from Washington to attend the conference, which follows disclosures in a series of articles written by Miss Genevieve Forbes for The Chicago Tribune."

"The president, after studying the disclosures of incompetence of employee and ill treatment of immigrants, came to the conclusion that the system of administration at the island is responsible for the conditions and ordered not only a shakeup in the force of inspectors but a revision of the rules and regulations which make it difficult to obtain properly qualified employees. Mr. Harding expressed the determination to clean up the island and thereby end the ceaseless complaints of arbitrary and inhumane treatment of immigrants."

Transcript of Forbes' congressional testimony on conditions and treatment of immigrants at Ellis island.