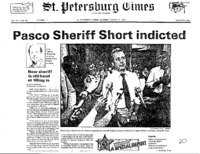 ". . .In several instances, Michels recommended the employment of men who did not tell the truth about their backgrounds when they filled out applications at the department. Michels, 48, is a long time friend of Sheriff John M. Short and helped run both of the sheriff's election campaigns. . ."

". . .Russell's investigators are apparently interested in Short's dealings with John T. Moorman, a wealthy part time deputy who helped Short make thousands of dollars in a series of personal transactions in 1981 and 1982. . ."

"Critical evidence in the violent deaths of two well-known men was destroyed during crime-scene investigations conducted by the Pasco County Sheriff's Department, according to an expert hired to review the two cases. Because the investigation were substantially flawed, the expert says, serious questions remain about the deaths of former Pasco Sheriff's captain Joseph H. Donahue and Tampa car dealer Ernie Haire. . ."

"The National Sheriff's Association has criticized the way Pasco County Sheriff John M. Short runs his department in a 60-page report that recommends a host of changes. Short requested the management study earlier this year in response to a series of St. Petersburg Times stories critical of the way he runs his department. . ."

". . .Pasco County Deputies Al Denning and Victor Morris were fired for taking an unauthorized coffee break - in a department where other deputies survived despite the fact that they filed false police reports, flunked polygraph tests and associated with organized crime figures. Deputies with special ties to Sheriff John M. Short frequently escape serious punishment while others are fired over minor infractions, according to files reviewed by the Times over the past seven months. . ."

". . .In an emotional phone call broadcast Friday morning by WDCF in Dade City, realtor Lewis Abraham asked Short either to deny that the sheriff's office ever investigated him or to submit himself to an examination that would determine if Short was lying. . ."

"Some Deputies Had Records Before Being Hired" - Lucy Morgan - St. Petersburg Times

". . .Before hiring anyone to be a law enforcement officer, the state demands that a police or sheriff's department certify that the applicant has been subject to a 'thorough background investigation' and is 'satisfied' that the person is of 'good moral character' . . ."

"Shooting Was Ruled Suicide, But Was It?" - Lucy Morgan - St. Petersburg Times

"Joseph H. Donahue was dead on his bathroom floor, his legs neatly crossed and his hands poised on his chest. Beside the body was a Smith & Wesson service revolver engraved with the date he left the Port Richey police department to become a top-ranking officer for Pasco County Sheriff John M. Short. The chamber of the gun was open and four live rounds of ammunition were scattered in a pool of Donahue's blood. . ."

"When Pasco County Sheriff John M. Short wants to buy or sell a piece of property or find a business partner, he often turns to his employees. While building his personal wealth, the sheriff has done business with at least eight subordinates and surrounded himself with fellow entrepreneurs. . ."

"Pasco County Sheriff, John M. Short investigated a number of prominent East Pasco residents as suspected drug smugglers in a secret, privately financed undercover operation in 1961-62. The investigation, which produced no arrests, apparently focused on men who had earned the enmity of Short or John T. Moorman, a wealthy part-time deputy and Short associate who helped finance the operation. . ."

New sheriff is old hand at filling in