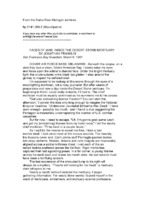 The reporting was intended for these media types: Magazine, Newspaper, Internet

". . . But after weeks of preparation and now a day inside the Desert Storm mortuary, I'm beginning to think I could really embalm, if I had to. The chief mortician must be equally convinced as he summons me to his corpse. " 'Got your embalming license, Franklin? You can start this afternoon.' . . . "

" . . . But off the wide, main boulevards, stories abound of poverty and malnutrition following a botched currency revaluation last year. Food prices, which rose 10-fold after the revaluation, have reportedly fallen back to about twice their old level, bringing enormous hardship to an already crippled economy."

". . .The fate of this area has implications beyond Syria. Iraq, Iran and Turkey have their own Kurdish populations. With a combined total of about 30 million, they are the world's largest stateless people.Our Correspondent Orla Guerin has spent 5 days under cover in Syria's Kurdish region and sent this report. . ."

". . .There are even claims that an elite counter-terrorism unit, one that has been funded and trained by Australia, is operating in West Papua where it is accused of targeting and killing independence leaders.The ABC's Hayden Cooper went undercover in the secretive Indonesian provinces, where he discovered a police state operating with impunity. . ."

"As most people are aware, Western journalists are not typically welcome in North Korea. The case of Euna Lee and Laura Ling last year was a good example of what can happen to those too eager for an NK scoop.  But that didn’t stop David McNeill of London’s ‘The Independent’ travelling to the DPRK just two weeks ago, ostensibly as a tourist attending the Pyongyang International Film Festival, but most likely there to try and cover the impeding Party Congress, initially rumoured to be starting around the same time.  He wasn’t the first reporter to enter the country on a tourist visa, and he won’t be the last.   But one thing is for sure, his front page story is a classic example of the hyperbolic and sensationalist approach to North Korea reporting that is standard in mainstream media -  a standard where fact-checking and normally rigid editorial standards go right out of the window."

"After 53 years of revolution, Cubans are increasingly exasperated by the restrictions imposed on them by the country's change-averse communist regime.  In spite of, or perhaps because of, recent modest economic reforms, activism is growing as the government's opponents overcome their fear of arrest and take to the streets. . ."

". . .Syria, in the grips of a deadly civil war, is not a safe place for journalists – 17 have been killed there in 2012, according to several NGOs.The country is doubly dangerous for Israelis. Syria is still officially at war with the Hebrew state and Israelis are unable to visit most of their neighbouring Arab countries. . ."

". . .Using secret filming, he met up with an underground network charging migrants as much as £1,500 to hide them in lorries destined for mainland Europe.Some who use the service have lived illegally in the UK for years, but want to move on in the hope of finding richer pickings elsewhere in Europe. Others are thought to be fleeing the justice system. . ."