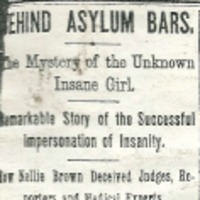 Since the 1870s, journalists have been posing as patients or attendants to expose horrid conditions and treatment inside mental hospitals. Nellie Bly, incidentally, was not the first.

"A Month Among the Mad" - By a Chaplain's Substitute - The Quiver

"A strange holiday, this!" some may be ready to exclaim. And in truth, such it seemed to me after the idea of offering myself had suggested itself. But the locality was attractive, and the novelty of the work had a sort of fascination. So Iwent; and being much interested in what I saw and heard, I have thought others might be interested too in my experience.