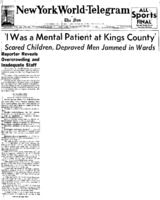 Frightened Youngsters Put In With Depraved

Official promises of ward-by-ward investigation of Kings County Hospital psychiatric division and other city mental institutions bring hope not only to former patients and their loved ones but to families now torn by mental illness. Because many of these people face the possibility of having to rely on city institutions to help their families, they look to the committee headed by Dr. Lawrence C. Kolb, director of the New York Psychiatric Institute, to find ways of bettering some of the shocking conditions which now exist. The worst of these at Kings County Hospital is the failure to segregate patients by age or illness.

Ward Miseries Are Worse for Women

My stay in the locked wards was the direct result of scores of letters this newspaper received from former patients of Kings County.  One of those detailed the experiences of a sane woman, who was admitted to "G" Building, suffering from depression brought on by menopause. For 12 days she lived in the center of the vortex: She saw senile women, tied in wheelchairs, who helplessly fouled their gowns all day long. She saw little girls - the youngest 9 - living among sex exhibitionists, drunks, dope addicts and desperately disturbed women of all sorts.

Then I was summoned to see my psychiatrist. Our session came about at my request because I wanted to know what the hospital was planning to do with me. This interview just lasted a few moments, in contrast to the first meeting, which was 20 minutes long. The doctor said that three courses of action were open: I might be retained at the hospital for further observation; I might be committed to a state mental hospital; or I might be released. He added that his decision would have to be backed up by the judgement of his immediate superior, whom I might see very soon.

In Ward 33 Only Delusion is Bearable

I had worked my way from Ward 31 to Ward 33 but I hadn't known what to expect: Ward 33 smelled like the hold of a troop ship. This is the odor of too many unwashed men sleeping too close together. Five beds had been set up in the day room, where men slept under the unrelenting glare of overhead lights all night long. Near the nurses' station lay a man who was tied to his bed by the sleeves of his straitjacket. He was straining against his bonds and staring straight ahead with unseeing eyes.

Two men used to tell me at length about the people they thought they had killed. When you listen to this sort of talk all day long, it is like listening to a gall bladder patient tell you about his operation. Boredom became almost insufferable. The temptation, to over-eat was great, because the food, although simple, was excellent. Several men helped out in the ward's little kitchen for whatever extra food they could get.

Not all days have 24 hours. To the patients at Kings County a "day" is sometimes only 50 minutes long. A visiting day at the psychiatric division of Kings County Hospital is officially 90 minutes long. But in practice, it is often shorter than that. The periods that come at 2 p.m. on Tuesdays, Thursdays and Sundays.

When patients are brought into Kings County in a violent state because of liquor, drugs or madness, they are laced into straitjackets, put under heavy sedation and packed off to Ward 51 on the fifth floor for close confinement and supervision. If they calm down, they are unbound and given the run of 51, under the watchful eyes of its muscular and highly trained attendants.

Before I could find out what happened, I was called into the psychiatrist's office. The doctor questioned me gently and with great patience and skill.I allowed him to drag from me a story I had prepared very carefully. I told him in considerable detail that emotional difficulties had been aggravated by heavy drinking and had created severe problems. After the session, the doctor said he was going to admit me to the hospital "for a couple of days," and I was taken into a small dressing room while the doctor talked to my wife.

Despite the best efforts of its dedicated doctors and nurses, Kings County Hospital disgorges many of its mental patients with their minds scraped raw because its staff and facilities are inadequate for the processing of the mentally ill. Personal inspection of the psychiatric division reveals:     Dreadful overcrowding - so bad that patients are forced to sleep in dining areas and hallways.     Lack of segregation - frightened children locked in with depraved adults.     Improper housing arrangements - slightly depressed patients thrown in with raving lunatics.     Inadequate staffing - evidenced by overworked doctors, nurses, attendants and social workers.     Unsanitary conditions in the bathrooms of the wards     Questionable psychiatric decisions - patients often sent off to state institutions or returned to society after only a few minutes of psychiatric examination.     Inadequate physical examination - patients not checked for venereal or other communicable diseases upon entering the hospital.