Lauren W. Gilfillan Among the Shop Girls and the Miners 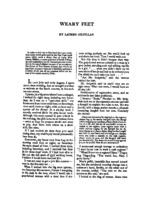 Lauren Gilfillan graduated from Smith College, found nothing when she went to New York in search of work as a writer and headed instead to the coal fields of Pittsburgh, during a strike and passed as the child of a miner. She wrote about it for Forum and Century and then turned her stories into a book, published by Viking.

From the precede: "At six o'clock she started with a truckload of youngsters for Pittsburgh, thirty-five miles away, to beg for money for food. Singing workers' songs in an atmosphere of picniclike gayety, the crew, with its two young Communist leaders, arrived in the city, only to be stopped by a protesting policeman. They waited in suspect for the storm to burst."

". . . In the pallid light I set to work. I brushed my teeth -- although I knew an authentic miner's child would not have done so -- with the strange-tasting sotty rain water in the pitcher. Better than the well water with its danger of typhoid. . . Now - clothes. A faded calico dress, ill-fitting, voluminous, with a tear in one sleeve. Too clean, this dress but it would soon be grimy enough. . . ."

"In late July and early August, I spent eleven days working, first as a salesgirl and then as waitress at the lunch counter, in five-and-ten cent stores. . . . It was not easy to get a job this summer -- even in the five-and-ten . . . "