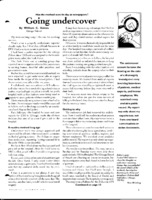 "Investigative Reporters and Editors, Inc. is a grassroots nonprofit organization dedicated to improving the quality of investigative reporting. IRE was formed in 1975 to create a forum in which journalists throughout the world could help each other by sharing story ideas, newsgathering techniques and news sources."

"Eric Szatkowski, a special agent for Wisconsin's Department of Justice, was Schuman's worst nightmare, one he'll be living for the next 35 years in prison. In his role as undercover cop, the 39-year-old Szatkowski (pronounced zat-kow-ski) switches personalities like people change shoes."

". . .The undercover account became the frosting on the cake of a thoroughly investigated story involving interviews of patients, medical experts, and former employees. We searched every available public record. My report was only about my experiences, not from overheard conversations or stolen documents. . ."

". . .If journalists continue to demonstrate the questionable ethics contained in the Food Lion case above, perphaps 'meat handling' should become a course in journalism schools' curricula. Treating subjects of stories as 'meat' or 'grist' for the journalism mill is unfortunately becoming a too common practice. This, of course, is not to say that all or majority  or even a large segment of journalists are behaving badly. But the taint from the few rubs off, and the odor is as foul as anything thr Food Lion reporters tried to uncover. . ." (IRE Journal's editors later apologized to ABC or the segment's producers for this piece. See "Apologies to ABC Producers" (http://dlib.nyu.edu/undercover/apologies-abc-producers-ire-journal-staff-ire-journal).