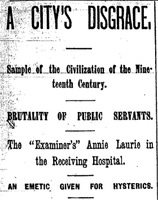 Journalists have devised any number of ruses to get inside hospitals and clinics --  as patients or staff members.

"The Expose as a Progressive Tool" - Albert Deutsch - Mental Hygiene

". . .What have these exposes accomplished? Have they helped or harmed the drive for improved mental hospitals and expanded mental health facilities? In either case, how can they be made more effective tools of progress? The expose, like the surgeon's scalpel, is a useful, but dangerous instrument. Its application can be constructive or destructive, depending on the user's skill, integreity, sensitivity, and timing. As applied to mental hospital conditions, its development can be traced to two widely divergent trends exemplified by the work of two remarkable women of the past century. . ."

Joe Casey spent five weeks filming undercover in a private care hospital on the outskirts of Bristol after getting a job as a support worker. He was shocked by what he witnessed.

On a near-daily basis, I watched as some of the very people entrusted with the care of society's most vulnerable targeted patients - often, it seemed, for their own amusement. They are scenes of torment that are not easily forgotten.The targets had no way of defending themselves or speaking out. Anyone who questioned the abuse met a wall of silence.

At Rusk State Hospital, you're either a criminal or insane. Or both.

". . .Police power at Rusk has shifted from the attendants to sociopathic inmates, who spend most of their time looking for opportunities to maul other patients. . ."

Most of U.S. Mental Hospitals Are a Shame and Disgrace

" . . . Thousands spend their days-often for weeks at a stretch-locked in devices euphemistically called 'restraints' : thick leather handcuffs, great canvas camisoles, 'muffs,' 'mitts,' wristlets, locks and straps and restraining sheets. Hundreds are confined in 'lodges' - bare, bed-less rooms reeking with filth and feces - by day lit only through half-inch holes in steel-plated windows, by night merely black tombs in which the cries of the insane echo unheard from the peeling plaster of the walls. . ."

When Kevin Heldman went undercover at Woodhull’s psychiatric unit, he wanted to experience how low-income people were treated. In 179 hours as a mental patient, he found little care and even less comfort.

"Around 3 a.m., hair uncombed, face unshaven, wearing a few layers of shabby jackets and shirts, I get off the subway outside Woodhull Medical and Mental Health Center in Brooklyn. I walk into the lobby and tell the hospital police that I'm looking for psychiatric help. An officer is amused, thinking I was brought to the hospital by the NYPD. 'They just dropped you off, huh?' she says. She escorts me to the emergency room. . . ."