The Presidents Club Scandal and Other Such Undercover Exposes 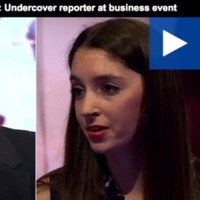 An undercover investigation by the Financial Times of behavior toward hostesses at The Presidents Club's annual men-only charity event in London and reaction to the story.

The Financial Times sent reporter Madison Marriage undercover to the annual Presidents Club charity dinner in London, a men-ony event. Her story reported on the way hostesses at the event were subjected to groping, sexually harassment and propositions, causing a range of immediate responses as outlined under the following headlines. Stories not behind a paywall are posted.

Dolores Marbourg Sells roses in the Streets-Lillian Russell Tells Her to Get Out of the Way, and Mr Oliver Sumner Teall Holds Her Hand.

"Just within the shelter of the entrance ofa  Broadway haberdashery an old woman sells flowers, recounting her experiences across town and the behavior of men outside the Union Club when their peers weren't watching from the windows.  "The clubmen seemed to come and seemed to go and to keep it up forever. After a time the first one, the one who asked me to fasten his boutonniere, and was told that I had no pin, came out and walked slowly past me looking for his carriage. He did not seem to find it and approached me to make some inquiries into the flower trade, probably, but as he di so two men came to the window. Plainly this was the gentleman's unlucky night. He strolled back into the club.   "...A man came to the window. After standing there a moment, he saw me. He stood looking at me with indecision in his eye. I was not seeing him. I was minding my own affairs attentively. Soon he left the window. Later he came down the club steps and walked up to me. I asked:   "'Flowers?'   "Yes." I handed him a boutinniere.   "'Twenty-five cents.'   "'You have stood here a long time. Are you tired?'   "'A little.'   "'Suppose I buy the rest of your flowers.' I looked grateful. The offer seemed kindly.   "'That would be charity, sir, for you do not need them.'   "'You could make it right.'   "I' appreciated the offer better I felt more curious. I looked him in the face and said:   "'I should not know how, sir.'   "He was not sure whether he needed to explain or not. He decided that he did. He looked the flowers over, seeming to be occupied with them if anyone should come to the window above.   "'Let me buy your flowers and take you to your home. This is not the place for a woman like you to stand. here I'll call a cab. You walk down two blocks and wait there.'   "I cannot. I must sell the flowers by waiting for customers. This is very good of you, sir, but it would be accepting charity.'   "Good God—don't you know'—   "'That it would be a good thing for—for charity's sake, yes, sir, but—'   "No—no—no. You don't catch my meaning. I'll explain later. You walk down two blocks.' ...

Men Only: Inside the Charity Fundraiser Where Hostesses are Put On Show - Madison Marriage - Financial Times

Financial TimesBy Madison Marriage January 23, 2018   Please use the sharing tools found via the email icon at the top of articles. Copying articles to share with others is a breach of FT.com T&Cs and Copyright Policy. Email licensing@ft.com to buy additional rights. Subscribers may share up to 10 or 20 articles per month using the gift article service. More information can be found here.  https://www.ft.com/content/075d679e-0033-11e8-9650-9c0ad2d7c5b5