"My Life With the Klan" - Jerry Thompson - Nashville Tennessean 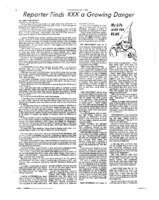 Thompson's assignment was to create a new identity for himself, join "the new Klan," and spend a few months observing it from the inside. (In the newsroom, the cover story was that Thompson had gone into rehab.) That time undercover stretched into a year and a half. His work complemented a major series on the new Klan. As his editor, John Seigenthaler, wrote in the preface to the book that followed: "To get behind their pious platitudes and expose what they really stood for, it was necessary for Thompson to misrepresent who he was. Had there been any other way to expose the Klan, Thompson's underground role would not have been necessary."

There was pressure, including death threats and a nuisance libel suit, on the Thompson family well after the series ran in December of 1980. The larger series on the new Klan, published by the Tennesssean, was a 1981 finalist for the Pulitzer Prize in the prestigious Public Service category. (It was not clear if the Thompson series had been submitted with the nomination package.)

I have fired Klan crosses, collected contributions at Klan roadblocks, marched in Klan street demonstrations and helped disrupt order at a public meeting with shouts in a Klan chorus. I have attended KKK den meetings where men armed with pistols and automatic rifles mouthed their routine racist rhetoric: "The niggers and the Jews are running the country."

I was about to become an undercover member of the Ku Klux Klan - but only if I first could withstand Klan leader Don Black's rapid-fire cross-examination about my background. And it was clear that he was suspicious, as he must be about every Klan recruit. He eyes, staring intently into my own, did not waved. He was looking for that flicker of hesitation, that momentary stumble, that one slip of mine that would tip him off that I was not what I pretended to be.

...on an unseasonably warm night last Feb. 23, Dr. Frank Abernathy welcomed approximately 60 of us - some were Klan members but most were not Klansmen - to his rambling ranch-style residence about 25 miles from Birmingham. There Don Black, then Alabama Grand Dragon, appealed to all who were there to join his Klan Knights.

Jim Hulslander and I, a couple of Klan "recruits," waited in the long corridor outside the Malaga Room of the Howard Johnson's Motel in Birmingham's Hoover suburb to take the KKK oath. Behind the closed door of the room, Don Black, Alabama Dram of the Knights of the Ku Klux Klan, his wife and three Klan members were preparing for the "naturalization" ceremony at which we could take the oath.

There were many times when I was an undercover member of the Ku Klux Klan, garbed in my white, sheet-like robe and pointed hood, when I felt plain silly. But never in my life have I felt any more stupid than the night I went through my "naturalization" ceremony and was, in effect, "baptized" into the Knights of the Ku Klux Klan.

"President Carter Saw Red...And Then He Called Me a Coward"

Jimmy Carter's famous grin disappeared as he looked across the Labor Day crowd at Tuscumbia, Ala., and saw that my Ku Klux Klan buddies were unfurling a Confederate battle flag. Suddenly, this Southern-born president, whose administration stood for equal rights for black Americans, recognized our white robes and hoods - and he saw red. "There are some who practice cowardice and preach fear and hatred," said President Carter departing from the text of his prepared speech and "It makes me angry when I see them with a Confederate battle flag."

The Warning Was Clear: No Mercy for Spies

Bill Riccio, decked out in a green beret, camouflage fatigues and jungle boots, fingered his 45-caliber automatic while holding forth on the front porch of Klansman Tommy Parson's home. "When we come to power," he told the Klansmen surrounding him, "we will be the most powerful force in this nation." Anger distorted his face, and his chin quivered as he warmed to his subject: "I can't tolerate - and none of us should tolerate - anyone who would infiltrate any group and gain the confidence and the friendship of the people in it, then publicly turn against us." I was standing just a few feet from Riccio....

I Was Living Double Life, But Was I the Only One?

Suddently on Nov. 30, it dawned on me I might not be the only person leading a double life - belonging to two different Klan factions that were bitter rivals. It was only a week before I was to give up my role as a reporter working undercover in the Klan. Until that day it had never occurred to me that a fellow member of Bill Wilkinson's Invisible Empire of the Ku Klux Klan might be infiltrating Don Black's Knights of the KKK, just as I had done.

Children in Robes of Hate...It Made Me Want To Cry

I was saddened every time I saw Klan children at a KKK function. In the flickering light of huge crosses in vacant fields there were always the beautiful, shining faces of small children - boys and girls - not yet in their teens; Klan children. They were being introduced to the Klan's racist doctrine of white supremacy. Each time I saw them I felt sorry for them.