Josiah Flynt as Cigaret: The Tramp's Tramp - The Century, Harper's, The Independent, The Los Angeles Times 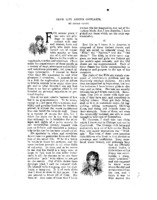 ". . .I finally decided to give up these fruitless investigations, and to become a tramp myself in order to achieve my ends. I felt fairly equipped for such an undertaking, having had a two years' residence in Germany, and having also played the tramp in my own country. My plan, however, was not to study the enforced vagrant, but rather the man who wanders because he desires to, and prefers begging to working. . ."

Some years ago I was sitting one spring afternoon on a railway-tie on "The Dope" when New York Barcas apeared on the scene. There was nothing very peculiar about Barcas, except his map of the United States. Not that he ever set up to be a topographer, or aspired to any rivalry with Johnston, Kiepert, or Zell, but, like the ancients, Barcas had his known and his unknown world, and like them again, he described the land he knew just as if it was all the world there was.

"The Tramp at Home" - Josiah Flynt - The Century

Being in New York and having ten days at my disposal before leaving for Europe, I decided to retrace some of my old routes, and to renew my acquaintance with old roadsters. What I saw and how I fared along the way are embodied in the following pages. I have confined myself to the rehearsal of bare facts without further comment, believing that the reader will moralize and philosophize whenever necessary.

Vagabonds specialize nowadays quite as much as other people. The fight for existence makes them do it. Although a few tramps are such all-round men that they can succeed almost anywhere, there are a great many others who find that they must devote their time to one distinct line of beginning in order to succeed. So to-day we have all sorts of hoboes. There are house-beggars, office-beggars, street-beggars, old-clothes-beggars and of late years still another specialization has become popular in vagabondage. It is called "land-squatting," which means that the beggar in question has chosen a particular district for his operations.

"What to do with the Tramp" - Josiah Flynt - The Century

I must first explain just what I mean by a tramp. Some people think that he is simply a man out of work, a man willing to labor if he has the chance; and others, although admitting that his not so found of toil as he might be, claim he is more a victim of circumstances than of his own perversity. Neither of these opinions seems to me to meet the case. According to my experience, - and I have studied the tramp carefully in over thirty States of the Unions, - his is a man, and too often a boy, who prefers vagabondage to any other business and in moments of enthusiasm actually brags about the wisdom of his choice.

For several years it has been my privilege to come in contact with men and women, boys and girls, who have been turned out of respectable society, or born out of it, and who are known to the world as vagabonds, rowdies, and criminals. I have made the acquaintance of these people in a variety of ways, sometimes accidentally and sometimes purposely, but almost always voluntarily. I wanted to know what their life amounted to and what pleasures it contained.

It was my last night in San Francisco and I could not leave without saying good-bye to Old Slim. His place was almost empty when I strolled in, and he was standing behind his greasy bar counting the day's winnings. The adios was soon said, and I started for the street again. I had hardly left the bar when the door suddenly squeaked on its rickety hinges, and a one-armed man came in with a handsome kid.

Conclusions from Personal Experience as an Amateur Tramp

A body of vagrants twice as large as the standing army of the United States, has compacted itself together in this country by common aims, methods of action, and manner of speech. Little is known of it, in whole or in part, for it is like the Irishman's flea or the "little joker" of the gambler - no sooner discovered than lost. To study it, one must become joined to it, part and parcel of its manifestations.

There are about seven thousand boys in the United States who live, from one end of the year to the other, exclusively in tramp life. It is impossible to take an exact census of all - they are too migratory, but I base my estimate on over ten years' acquaintance with American tramp life, and on travels with tramps which have taken me into thirty states. In winter, there are easily five hundred tramp boys in New York City alone.

"The Tramp and the Railroads" - Josiah Flynt - The Century

... It was my fate, a few days after setting foot in my native land again, to be asked by the general manager of one of our railroads to make a report to him on the tramp situation on the lines under his control. For three years he had been hard at work organizing a police force which was to rid the lines under his control of the tramp nuisance, and he believed that he was gradually succeeding in his task, but he wanted me to go over his property to give him an independent opinion of what needed to be done.

There are slums in the United States, however, which are distinctly American in origin and arrangement, and which no other country in the world is troubled with. I refer to the tramp "hang-outs" and camps situated on almost all of the trunk railroad lines in this country, and to the vagrant and criminal rabble which infest them. All countries are plagued with wandering bands of beggars and thieves, but ours is the only one whose railroads are overrun by professional out-of-work gangs of "hold-up-men," and a constantly increasing army of hobos. In Europe, it would be utterly impossible for such a state of affairs to exist, and European railroad men as well as European vagrants find nothing in our railroad life more surprising than the fact that it exists in the United States.

Their Wails of Woe Must Often Be Veritable Works of Arts

Each Has His "System" - The tramps' methods of begging, as has been said, are largely regulated by circumstances and experience, but even the amateurs among them have theories about the professions, and they are never more interesting than when sitting around some "hang-out" campfires, discussing their notions of the kind of "ghost stories" that go best with different sorts of people. Indeed, the bulk of their time is passed in conferences of this character. Each man, like a passionate gambler, has a "system," and he enjoys "chewing the rag" about its intricacies.

"How Hobos Are Made" - Josiah Flynt - Los Angeles Times

A Specialist in the Evolution of the Tramp

Scattered over the railroads, sometimes traveling in freight cars, and sometimes sitting pensively around camp fires, working when the mood is on them and loafing when they have accumulated a "stake," always criticising other people, but never themselves, seldom very happy or unhappy, and almost constantly without homes such as the persevering workman struggles for and secures, there is an army of men and boys, who, is a census of the unemployed was taken, would have to be included in the class which the regular tramps call "Gay Cats."