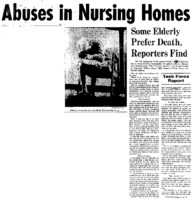 Reporters, hired to work with phony references in nursing homes for the poor, uncover filthy conditions, unqualified employees (as evidenced by their own hiring), and undignified care of the elderly, often in the name of profit.

". . .The homes, including 15 in Chicago, have had their licenses revoked or have closed voluntarily because they cannot meet minimum standards ordered by city and state health officials. . ."

"Gov. Ogilvie yesterday announced an increase in the number of nursing home inspectors and declared that owners of the homes have 30 days to correct health code violation or be closed. . ."

"A panel of experts that studied nursing home conditions at the request of the Chicago Board of Health has called for an end to profiteering by nursing home owners who are pocketing profits of up to 40 percent. . ."

"Mayor Daley predicted yesterday that more substandard Chicago nursing homes will be taken to court soon and outlined a series of programs to improve living conditions for the elderly. . ."

"Employees and operators of six nursing homes were summoned for questioning by Chicago Board of Health officials in closed door hearings which began yesterday into nursing home abuses witnessed by Tribune Task Force reporters and Better Government Association Investigators. . ."

"Sen. Percy (R., Ill.) made a surprise inspection of Chicago nursing homes yesterday and predicted that the disclosures of neglect and abuse of the elderly poor here will bring nationwide reforms. . ."

"A controversial 32-year-old physician appointed Wednesday by Gov. Ogilvie to crack down on substandard nursing homes promised yesterday to revamp state inspection and insure that the nursing home scandal exposed by The Tribune 'never happens again' . . ."

"The owner of a nursing home ordered closed by city health officials locked the doors yesterday and refused for six hours to permit the transfer of 33 public aid patients, even though 15 said they wanted to leave. . ."

"City health officials charged yesterday that the transfer of former mental patients into Chicago area nursing homes since 1969 has created a crisis in care for mentally disturbed and elderly patients. They urged that the transfers be stopped. . ."

". . . It was his first day on the job, and the young nursing home administrator paced the floor in front of his desk. He had a problem, and he knew it. He was utterly incompetent for the task of administering care to 31 helpless old people, many of them crippled and senile, who lived in the South Side nursing home. . ."

". . .Mermelstein, 48, and his wife, Louise, own and operate Balmoral Nursing Home, 2055 W. Balmoral Av., one of nearly 20 nursing homes where Tribune Task Force reporters and Better Government Association investigators worked undercover as nurse's aides, maintenance men and mop boys. At most homes, they quit in disgust after several days of observing patient neglect and abuse. . ."

". . .Dr. Franklin Yoder, Illinois director of public heath, made a surprise inspection of several Chicago nursing homes yesterday and described one of the homes as a 'horrible lousy place' . . ."

". . .What is unusual in these two cases is that both the patients and their "families" were members of the Tribune Task Force and Better Government Association team that spent six weeks investigating every phase of nursing home operation. . ."

". . .Subpenas were served on Chicago area nursing home operators yesterday as a special federal grand jury opened an investigation into the operations of substandard homes and their dealings with drug suppliers, physicians and the public agencies that pay for patient care. . ."

"The toothless old woman, her shoulders bent by age and disease, stood in the kitchen doorway staring at two nurse's aides drinking coffee. Her request was a simple one: she wanted a cup. "Well, you can't have any," one of the aides responded. "Why not?" asked the woman, her arthritic hands clutching a metal walker. "Shut up, frog mouth; we're runnin' this kitchen," the aide snapped. The woman stood expressionless for a moment, then shuffled away to her room. . ."

"They describe themselves as the living dead, people who spend the final days of their lives eating, sleeping, staring and, finally, dying. They are the victims of a multimillion-dollar nursing home and shelter care boom in the Chicago area that has mushroomed beyond the control of city and state healthcare officials. . ."

"Mayor Daley yesterday ordered key city department heads to begin immediately to draft ordinances upgrading requirements for nursing home employees. During a two-hour meeting in the mayor's office, Daley also said he has ordered city building, fire and health inspectors to "increase their surveillance" of nursing homes. Daley told reporters that new laws controlling the operation of nursing homes probably will include a specific ratio of nurse's aides and nurses to patients. . ."

". . .It is called the Kenmore House Nursing Home and it is a reminder that for many of our elderly poor the holden years are a cruel trick filled with dreary, smelly rooms, incompetent staff and meals consisting of table scraps. I worked at Kenmore house at the filth is everywhere. . ."

"The state Public Aid Department announced yesterday it is withholding thousands of dollars in public aid payments to Chicago area nursing homes named in a Tribune series exposing mistreatment and neglect of the elderly poor. George Dunne, County Board president, disclosed plans to remove hundreds of public aid patients from substandard nursing homes in an attempt to force them to close. . ."

"Ald. Seymour Simon, who eight years ago as County Board president ordered bus-loads of patients removed from substandard nursing homes, yesterday praised Tribune disclosures of wretched nursing home conditions and said he will seek a City Council investigation. "I would hope that Board of Health and public aid officials will work together quickly to find extra space in good nursing homes for those now living under the conditions found by your reporters," said Simon, an independent Democrat. . ."

". . .They hire strangers off the street without bothering to find out who they are and pay them a pittance to care for thousands of helpless, elderly and mentally disturbed patients. They profess to operate according to the strict guidelines set down by public health officials, yet thumb their noses at state inspectors who seek to close them down for hundreds of health, fire and sanitary violations. . ."

"The man and woman had been herded into the bathroom of the North Side nursing home and now they stood naked, facing each other in helpless humiliation. Shivering and self-conscious, the two patients had responded almost mechanically to the orders to undress, barked by a nurse's aide. 'Goddamn it, hurry up. I have no time for you," the aide snapped when they hesitated a moment. The woman stood silent, staring at the floor. Then in a final desperate effort to salvage some dignity from the incident, she clutched a thin sweater to her breasts and protested: 'But he's not my boyfriend' . . ."

"The Chicago Tribune begins today an extraordinary report on the misery and plight of hundreds of persons living in a shadow world of our society. They are the unfortunate confined to poorly staffed and equipped nursing homes in the metropolitan area. Today's account and eyewitness stories which will appear in the next several days have been compiled by a task force of reporters. It is the first assigned of this special unit of Tribune reporters and introduces a new concept in comprehensive news gathering. . ."