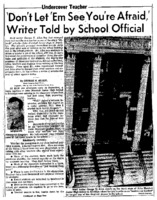 In this 16-part series, New York World-Telegram and Sun reporter George Allen reports on the two months he spent working as an English teacher at Brooklyn's John Marshall Junior High School in an effort to "report on a crime-ridden school from the inside." He was credentialed a few months earlier as part of the assignment and took three education courses to prepare at Columbia Teachers' College, where he earned a substitute teacher's license with a falsified employment history.

George N. Allen's series won a Heywood Broun Memorial Award for 1958 and an alumni award from Columbia University. It is the earliest known of a number of undercover looks at educational institutions for which reporters have posed as teachers, administrators, or students. Reaction to Allen's series was "swift and outspoken" in his recollection for his book, Undercover Teacher. Time magazine covered the project twice, admiringly, and the judge presiding over a Kings County grand jury investigating crimes at the school offered lavish praise. Public response was overwhelmingly positive, according to Allen, but also included some scathing attacks on his method. Classroom teachers, he said, were nearly unanimously favorable. Allen testified for three days before the Brooklyn grand jury, effectively allowing him to put the articles into the judicial record. Detractors, especially the school's administrators, rebuked his effort as an invasion of the sanctity of the classroom. Ultimately, Allen's teaching license was revoked (because of the fictionalized job history). He was never indicted, nor was a resolution ever enacted to to condemn his actions for seriously violating the moral and ethical standards of the teaching profession. His book about the experience, Undercover Teacher, was published in 1960.

College Courses Not Much Help in Difficult Classes

The training in education which I was required to take for my New York City teaching license was of little practical value to me in classroom 404 of John Marshall Junior High School.I taught two ninth grade adjustment classes - slow learners - and two eighth grade average classes. In all of them, I felt handicapped because I didn't know how to teach or control them.

Getting School Job is Easy as ABC, Reporter Learns

Getting a job as a teacher in our city's school system is a relatively simple procedure, so hard pressed are school officials for teachers.I simply walked in off the street and my credentials were readily accepted by officials of the administrative headquarters of the Board of Education at 110 Livingston St., Bklyn.

It was Thursday, Sept. 4, when I first reported as a teacher - of what I didn't yet know - at John Marshall Junior High School in Brooklyn. Experienced teachers were not required to report until Sept. 5 and classes did not start until Sept. 8. But I was there because of a well-publicized announcement by school authorities that orientation meeting for new teachers would be held in all schools Sept. 4th.

A group was pushing and shoving around my desk, fighting for extra sheets of paper. A jacket flew across the room. A pencil bounced off a window. Bedlam.

From [Mary's] report card I knew that she and three sisters were living with an aunt who had four or five children of her own. A previous teacher had noted "child overworked at home" on her cumulative record card.

Slow Pupils Cheated by Our Schools

I got the surprise of my teaching life one morning in early October.I walked into the classroom of another teacher at JHS 210 to see how he was teaching hygiene to a group of "adjustment" pupils - neither of the groups I taught. By this time, I was aware of the learning limitation of my own "adjustment" (slow-learning) students. And I was curious to see how other teachers were handling the other ones.

Lessons Get Lost in Paper Work

At the beginning of the school term I had to copy and recopy the registers of my various classes so many times that I once got writer's cramp. It seemed to me that in this age of modern office machinery, the school system's methods of handling its clerical work is far out of date - and wasteful.

Several teachers cited an incident they had seen the day before in the school's general office. They had seen a woman daily substitute, her eyes filled with tears, asking an assistant principal why the children in her classes that day had tried so hard to resist learning anything.

Josephine is a tall, well-built girl. She spent most of her time in class primping or looking at a magazine. Periodically she bust into a rage over some imagined insult. Her IQ, as listed on her record card, is 58.

Fortunately for me, I didn't have to live on my teacher's salary during the two months I taught at John Marshall Junior High in Brooklyn.My take home par was approximately $60 a week. As was reported at the start of this series, I spent not one penny of my salary. It's safely banked in a savings account and will be turned over to a teacher's fund or spent in some manner in the interests of the city school children.

Pupils Would Profit By Isolating 'Toughs'

I came away from my two months as a substitute teacher in Brooklyn's John marshall Junior High School with some strong conclusions. They are based on what I saw and heard and experienced as a duly licensed teacher of two classes of adjustment students and two classes of average students. My experiences paralleled those of many other new teachers who entered the school system this term.