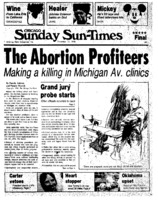 A five-month investigation, led by Pamela Zekman, into the Michigan Avenue "abortion profiteers," and their dangerous and unsavory, unsanitary practices, including performing the procedure regularly on women who were not pregnant.

Grand jury probes followed this five-month investigation and the Sun-Times resolved to stop selling advertising space to clinics because it would not be able to verify their competence. Reporters found that dozens of procedures were performed on women who were not pregnant and others were illegally performed on women who were more than 12 weeks along in their pregnancies. An alarming number of women suffered infections and other complications because of unsanitary conditions at clinics and there were often incompetent and unqualified doctors performing the procedures Clinics also failed to offer critical post-op care and were incompetent at record-keeping.

On Michigan Av., women entrust their bodies to doctors who may be mere mechanics on the abortion assembly line. They may be moonlighting residents, general practitioners with little or no training in women's medicine, or even unlicensed physicians. While slick clinic brochures promise only board-certified obstetrician-gynecologists, few have earned that accreditation.

Dr. Ming Kow Hah, who has already lost his medical license in one state and faces revocation in Illinois, may give the fastest abortions in Chicago. According to a five-month investigation by the Sun-Times and the Better Government Assn., Hah may also give the most painful abortions in the city.

Nurse to aide: 'Fake that pulse!'

We were hired off the street as aides, medical assistants and counselors. Without checking our references or credentials, four of Chicago's abortion clinics gave us jobs we were unqualified to hold and tasks we were untrained to perform. The clinics asked us to do everything but perform abortions. They wanted us to remove IVs, administer injections, give psychological counseling and assist in surgery.

They are identical twins with identical cons. They bill themselves as "counselors." But their business is sales, and they use every trick in the book to peddle abortions to confused and frightened women. Victoria Sanders and Valerie McCullough operate competing abortion referral services out of fancy suites and between them advertise half a dozen "abortion hot lines" in four states.

At least 12 women have died following legal abortions in Illinois walk-in abortion clinics. Although state health officials knew of not a single clinic death just a week ago, the Sun-Times and Better Government Assn. have learned of a dozen women who suffered fatal infections or bled to death after undergoing abortion procedures in state-regulated clinics.

Chicago's abortion profiteers are padding their profits with Medicaid funds illegally obtained through kickbacks and fraudulent billing schemes. During a five-month investigation of some abortion clinics and referral agencies, the Sun-Times and Better Government Assn. have documented massive abuse of the Medicaid program and flagrant violations of federal law.

Counseling the patient: Buy this abortion

During a five-month investigation of the Chicago abortion business, The Sun-Times and Better Government Assn. discovered that in some Michigan Av. abortion mills, women who are hired to counsel don't - they're paid to sell.

During a five-month investigation, the Sun-Times and Better Government Assn. found that some abortion profiteers advertise under a number of deceptive names to entice women into their Michigan Avenue clinics. In those clinics, telephone sales techniques are monitored more carefully than a doctor's operating techniques. New counselors or nursing assistants learn quickly that the telephone is the clinic's most important instrument.

During a five-month investigation by the Sun-Times and Better Government Assn., reporters and researchers worked undercover in six of the city's 13 clinics. In four of those clinics - the Michigan Av. abortion mills - we have documented how women's lives are endangered by people who care more for profits than patients. But working undercover in two other clinics, and working in co-operation with a third, we found that abortion doesn't have to be an assembly-line operation. We found that in clinics like these, women may find safe and compassionate medical care.

Inside story of city's pro-life movement

They marched around the clinic, swinging their rosaries, screeching Hail Marys and howling the Lord's Prayer. Among them was Sun-Times reporter Pamela Warrick - the only marcher without rosary beads. Armed with a pseudonym and a prayerbook, she joined Chicago's pro-life movement to get an inside look at the hardcore opposition to legalized abortion. After several weeks as a volunteer at the Illinois Right-To-Life headquarters and a weekend showing gory movies on the group's traveling Life-Mobile, Warrick was referred to the office of Joseph M. Scheidler - considered one of the most radical and powerful U.S. anti-abortion leaders.