"The Shame of the Prisons"- Ben Bagdikian - Washington Post 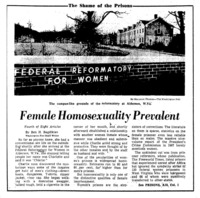 The result of three months of reporting and a week undercover in a Pennsylvania prison, this series examines the conditions, challenges, and systematic culture of the US prison system. Stories focus on California, Washington DC, South Carolina, and Pennsylvania.

The series was also produced as a paperback by Ben Bagdikian and Leon Dash, who also wrote part of the series. (New York: PocketBooks 1972, no online version available).

". . . If today is average, 8,000 American men, women, and children for the first time in their lives will enter locked cages in the name of justice.  If theirs is an average experience they will, in addition to any genuine justice received, be forced into programs of psychological destruction.  If they serve sentences most of them will not be by decision of judges acting under the Constitution but by casual bureaucrats acting under no rules whatever; they will undergo a significant probability of forced homosexualism, and they will emerge from this experience a greater threat to society than when they went in.  . ."

Six Days in State Prison Through The Eyes of a 'Murderer'

The aging forger slid over the bench where we were watching television.  "Did you really do it?" "Do what?" "You know. The murder."  I looked at him in astonishment.  Prisoners don't say things like that to each other.  It's the kind of question a clumsy informer asks.  "No," I told him coldly, "I didn't."  It was true.  I was in a maximum security penitentiary for murder.  But I hadn't killed anyone.  No one at the prison - warden, guards, inmates - knew that.  All they knew was that one night, two state policemen delivered me in handcuffs as a "transfer" from a distant county jail.

They look like a Norman Rockwell painting of democratic American life - kindergarten kids, some Orientals, some balck, some Caucasian, cheeks ros in the morning cold, skipping and laughing, paired hand-in-hand, with two good-natured teachers guiding them along the sidewalk of Baxter Street.  A few of the children look curiously at the scene across the street. Fourteen men, all blacks, handcuffed in pairs, shivering in their shirtsleeves, jump out of a police van and disappear into a steel doorway of the Manhattan House of Detention, the Tombs.  The first thought prompted by the sight of innocent eyes watching the gray scene is, "Thank God they dont know what it's like inside." The second thought is, "Perhaps they should.  Some of theme, some time in their lives, will be held in a jail."

So far as anyone knew, she had a conventional sex life on the outside.  But shortly after she arrived at the Federal Reformatory for Women in Alderson, W. Va., she stopped telling people her name was Charlotte and said it was "Charlie."  Charlie soon discovered the mysterious ways some of the inmates got hold of men's clothing - desert boots, dungarees, T-shirts, zipper jacket, visor cap.  She began walking with a masculine swagger, talked tough, held a cigarette in the corner of her mouth, and shortly afterward established a relationship with another woman inmate whose manner was obedient and submissive while Charlie acted strong and protective.  They were thought of by the other inmates and by the staff as husband and wife.

". . . The price list is posted in big red letters for every kid in the classroom to see.  Coffee break? $40.  Sit in the teacher's swivel chair for a whole period? $20.  Take a trip to the library for a book? Only 50 cents.  Get out of here entirely? $7,875.  You don't have the money? Just sign one of these contracts. "I will remain in my sear during the testing period. I will not talk to other wards..." up to $50 payment. "I will not fight with Chuck over the TV program"–$100.  "I will write out as closely as I can remember exactly what I said and exactly what Chuck said when we fought and then I will write out what I could have said to avoid a fight and still get my point across." –$300 . . ."

". . .The 12-year-old boy thought he was alone in the dormitory of Cottage 7, sweeping under the beds.  But he wasn't alone.  A creaking wooden floorboard caused him to turn.  A 14-year-old fellow inmate of the old Industrial Home School For Colored boys (now Junior Village) was sneaking up behind him.  "He said he'd been watching me and said I was either going to fight him or let him have sex with me," Lawrence Smith Jr. recalls.  Smith refused.  The bigger boy grabbed him.  Smith pushed back.  They fought and Smith says he won that battle.  This was one boy's introduction, 18 years ago, to the world of District of Columbia "corrections" - to sexual assaults, fights and beatings behind the walls of institutions where juveniles and adults from Washington have been sent for the announced purpose of being rehabilitated. . ."

"It used to be that the favorite recreational activity of prisoners was playing baseball. Now it's filing lawsuits." says Evelle J. Younger, attorney general of California. Is there a new kind of person behind bars in the 1970s? More interested in politics than athletics? More militant, organized, and rebellious? Younger is right about the growth of lawsuits. There is a swelling tide of civil petitions flowing out of prison cells into courtrooms. These are not the traditional jailhouse appeals on criminal cases, which continue. The new phenomenon is civil petitions suing prison administrators for allegedly violating human and civil rights.

". . . When you turned down Fourth Street you saw all the usual clues: the 14-food cyclone fence with escapeproof top, the 51/2-inch window frames looking normal but precisely to small for the passage of the human head, the high intensity lights around the perimeter. But something was wrong. The gate was wide open and nobody was guarding it. . ."