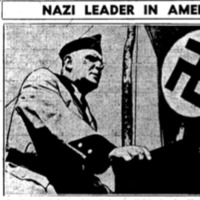 The Times published two simultaneous reports of time spent undercover with US Nazi groups in 1937, before World War II. The reporters, brothers John C. and James J. Metcalfe, gained the trust of their "leaders," gaining information deliberately kept out of the public sphere by the group. The reports are accompanied by stories about events in Germany, nazi action in the US, and results of the Times reports themselves. Everything's published here in the original page layout, with multiple stories per entry.

The brainchild of Chicago Daily Times's managing editor Louis Ruppel, the popular series was praised in Time magazine's media column later that month and was emblematic of Ruppel's innovations for the Times.

Throughout the summer Billy Rose swings his colorful water carnival at the Clevelant Great Lakes exposition to a might climax while a chorus sings, "It can't happen here!" Black shirts, brown shirts, reds collapse in a fantastic dance when a peace loving legion of Americans marches onto the stage.  But in a basement apartment a few miles away, I meet an Amerikadeutscher Volksbund fanatic, who is convinced "it can happen here."  He is Adolph Scheidt, alias Schmidt, 564 E. 120th st., a sheet metal worker employed by the General Aviation Corp., and secretary of the Cleveland Bund post.  A disabled German world war veteran, Scheidt apparently is in almost constant pain.  he breathes hard and occasionally twists his body and grips his side as if to ease the pain.  His icy eyes stare at me suspiciously as I meet him in front of his apartment.  I introduce myslf and he gives me the nazi salute.

Initial subscriptions for the Chicago Bunds' proposed camp near Grays Lake total $2,000, Fuehrer Fritz Heberling tells me on Aug, 18.  "With an insurance company taking a mortgage for $4,000, we need only $2,500 more," he says.  "because we already have 1,500 in the Bund fund, the total cost will be $10,000. We are going to have baby bonds.  But first we have to have a charter and make a corporation.  It will take about two months.  We don't have an option on the property, but we are not worried about that."

Fritz Matthes, commander of the Deutscher Volksbund storm troops, tells me how he fooled reporters who wanted to know the name of the Chicago Fuehrer at the Kenosha German day celebration. "First we told them it was Goldburg," he laughs.  "then we say his name is Dickstein."  I tell him it was a good joke and pretend to enjoy it heartily.  Matthes gives us a lengthy speech on staying out of trouble when we are in uniform and denouncing those who did not make their appearence in uniform, declaring they apparently lacked the courage to join us.

The fact that the Amerikadeutscher Volksbund has opened its membership to German citizens "some day may cause a lot of trouble," Fritz Heberling, fuehrer of the Deutscher Volksbund tells me.  We are seated in Heberling's home at 3240 W. Warner ave. for a "school" session.  I have volunteered to help Heberling with English pronunciation and grammar and he is to help me with German. He says he never could conscientiously become an American citizen because he could not be loyal to two countries at the same time.  "you know," he explains, "one time I went to the courthouse - the federal office - to file my intention but when I went up the steps and saw those people writing out papers and swearing, I just could not do it.  I turned around and went out again.

Fritz Matthes, drillmaster of the Deutscher Volksbund, tells me not to attempt to retaliate if the CIO or "the communists" start trouble when we parade at Kenosha, Wis., on German day.  "I'll issue the commands if the situation requires action," he warns.  This warning comes six days before the Kenosha celebration after a drill night at the Bundscheim.  At this meeting and at the business meeting of the Amerikadeutscher Bund two days later, a dozen members asks for copies of the pictures I took at Hindenberg camp the previous Sunday.  Members at amused at the stories of the Hindenburg camp celebration in the Milwaukee Sentinel headed "Fail to Heil Hitler."

By the very pinnacle of American naziism - Der Fuehrer Fritz Kuhn - the TIMES was informed of a "special arrangement" between the German-American Bund and Chancellor Adolf Hitler of Germany.  Ramifications of the "arrangement" Kuhn declared, include a secret relationship between the Bund and the new German ambassador to the United States and German counsuls throughout the country.  Publicly, Kuhn has said repeatedly:  "We are strictly an American organization with no connections with Germany." But in the privacy of his executive office on the second floor of the Bund national headquarters at 178 E. 85th st., New York, he had a different story to tell one of the reporters who became a trusted storm trooper.

A bewildered little woman, aged beyond her years, sat in her shabby basement apartment at 2631 Lakewood ave., today sobbing for "justice" from her American nazi storm troop husband who deserted her for a childhood sweetheart. She is Mrs. Freida Lee, 54, and she told her story after identifying a picture of Robert Lee, Los Angeles member of the Amerikadeutsher Volksbund, as the husband who deserted her on Dec. 13, 1932.  The picture appeared in the TIMES Sept. 10 in connection with the series on American nazis.

Backed by a flood of nazi propaganda, a movement to boycott all Jewish merchants and all newspapers, movie theaters, and radio program sponsors employing Jews in preference to gentiles is being pushed strongly today by the Amerikadeutscher Volksbund and allied organizations. The movement was started by the Friends of New Germany, predecessor of the Bund, in 1935 to counteract the boycott of German goods. Rebate stamps are issued to customers who purchase in Bund-approved stores. Most recent support for the campaign came from Donald Shea, Baltimore, founder of the National Gentile League, inc., who spoke at the Bund's camp Nordland Sept 5. He was widely cheered when he announced his organization would join the Bund's boycott.

American nazis, aping the Fuehrer of their homeland, applaud vicious attacts on Chicago's Cardinal Mundelein, the Roman Catholic Church, and all Christian religions which conflict with national socialism.  But the Chicago leader of the Amerikadeutscher Volksbund, buck-toothed Peter Gissibl, a tailer, makes cassocks for priests and is actively soliciting their business.  Early this month, Times reporter James Metcalfe, who became a Deutcher Volksbund storm trooper under the name of Oberwinder, drafted a letter for Gissibl which his business partner said was to go to 250 Catholic priests.

". . . 'You've won the most important prize of the entire drawing!' the speaker is an Amerikadeutscher Volksbund storm trooper and he is referring toa copy of Adolf Hitler's 'Mein Kampf' (My Battle) which I discover is just as much a 'Bible' to American nazis as it is to Hitler's Schutz Staffel guards in Berlin.  I hold the ticket which wins 'Mein Kampf' in a drawing at the fourth annual German day of Nassau county June 6 at the Brauhof in New Hyde Park, L.I.  The main prize is a round trip to Germany but loyal storm troopers feel it is no more important than a copy of Der Fuchrer's account of his struggle. . ."

"The Amerikadeutscher Volksbund, U.S. voice of nazism, is seeking to consolidate all fascist elements in America, wit their vari-colored shirts, into one great movement which the Hitler-inspired Bund will lead.  TIMES reporters who joined the Bund marched with Italian black shirts and Ukranian brown shirts.  Leaders revealed plans to enlist the support of other fascist-inclined groups.  At the same time Newton Jenkins, perenially hopefully political candidate of Chicago is attemption to unite "nationalist" groups in a third party and the Bund is looking for a leader of its third party movement. . ."

I am a stranger in the crowded bar at Camp Siegfried, summer home of the German-American Bund near Yaphank, L.I.. It is Sunday, May 23, and American nazis of the New York metropolitan area are celebrating the official summer opening of their camp.  The air is heavy with conversation in German and it is difficult for me to catch snatches of it since I have forgotten much of the German I learned in Berlin as a boy.  My aim is to become acquainted with a Bund member who will invite me to a meeting where I can become a part of the organizations.  I talk about the inevetable weather toa kindly appearing man next to me and soon we take our beer out to a picnic table under the tall trees that surround the restaurant-bar building.  I tell him I am a stranger in New York and that I came to Camp Siegfried because I wanted to be with people of my own race.

By TIMES men who joined it!

"The regimented tread of marching men under the flaming nazi swastika resounds from coast to coast in the United States today. In uniforms strangely suggestive of those worn by Adolf Hitler's nazi storm troops a relatively small but rapidly growing army is preparing for the American counterpart of "Der Tag," when it plans to seize control of the United States. "We are not plotting a revolution," leaders tell their followers. "But we are going to be prepared to wrest control from the communist Jews when they start their revolution. We will save America for white-Americans. . ."