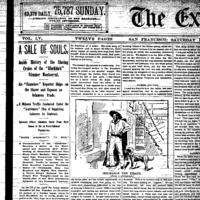 Brommage spent nearly six months aboard the Montserrat, documenting the voyage of a blackbirder leaving from San Francisco to recruit workers from the Gilbert Islands to work plantations in Guatemala on long-term contracts of indenture. The cover story for the journey was a shipment of coal picked up in British Columbia.  Unlike Melvin's series in the Argus, Brommage's account was full of nasty characters, shady to illegal business practices, abuse and danger.

The Examiner sought and published a response from the ship's captain. This is one of three known on-ship reports of blackbirding voyages. The other two were in Australian newspapers.

"Experiences of a 'Blackbirder' Among the Gilbert Islands" - Arthur Inkersly and W.H. Brommage - Overland Monthly

". . .Passing over the voyage, I will proceed at once with the narrative of incidents at Butaritari, and other islands of the Gilbert, or Kingsmill, Archipelago, from which group came several of the South Sea Islands at the Midwinter Fair. . ."