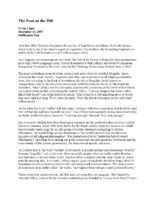 Unger, undercover on a tour group led by Tim LaHaye (co-author, the Left Behind series), travels the Holy Land with some of LaHaye's followers.  His reporting examines the connections George W. Bush, then in office, had to Religious Right leaders, and their influence on policy.  The pieces also look at the everyday experience of believers - because Unger did not reveal that he was a reporter on assignment (though he did say he was a writer from New York), he was, he believes, spoken too more freely than he would have been with full disclosure.

Unger did not reveal his reporting method until 2007, in a Huffington Post story.  He received no reaction from LaHaye or any of his tour mates after the publication of the book or the Vanity Fair story.

Best-selling author and evangelical leader Tim LaHaye has contacts that extend to the White House. That could spell trouble, since his theology espouses a bloody apocalypse in Israel.

"On a scorching afternoon in May, Tim LaHaye, the 79-year-old co-author of the “Left Behind” series of apocalyptic thrillers, leads several dozen of his acolytes up a  long, winding path to a hilltop in the ancient fortress city of Megiddo, Israel. LaHaye is not a household name in the secular world, but in the parallel universe of evangelical Christians he is the ultimate cultural icon. The author or co-author of more than 75 books, LaHaye in 2001 was named the most influential American evangelical leader of the past 25 years by the Institute for the Study of American Evangelicals. With more than 63 million copies of his “Left Behind” novels sold, he is one of the best-selling authors in all of American history. Here, a group of about 90 evangelical Christians who embrace the astonishing theology he espouses have joined him in the Holy Land for the “Walking Where Jesus Walked” tour. Megiddo, the site of about 20 different civilizations over the last 10,000 years, is among the first stops on our pilgrimage, and, given that LaHaye’s specialty is the apocalypse, it is also one of the most important. Alexander the Great, Saladin, Napoleon, and other renowned warriors all fought great battles here. But if Megiddo is to go down in history as the greatest battlefield on earth, its real test is yet to come. According to the book of Revelation, the hill of Megiddo—better known as Armageddon—will be the site of a cataclysmic battle between the forces of Christ and the Antichrist. . . "

"The Fool on the Hill" - Craig Unger - Huffington Post

"Now that Mike Huckabee has joined the top tier of Republican candidates, it's worth taking a closer look at one of his chief evangelical supporters, Tim LaHaye, the bestselling Rapturite co-author of the Left Behind series (63 million copies sold!). As it happens, in researching my new book The Fall of the House of Bush (for more information, go to http://www.craigunger.com, I traveled undercover with LaHaye and about 90 American evangelical Christians to the Holy Land for the "Walking Where Jesus Walked" tour in 2005.  The most astonishing moment of my journey took place when we reached Megiddo, Israel. Alexander the Great, Saladin, Napoleon, and other renowned warriors all fought great battles there. But according to the book of Revelation, the hill of Megiddo--better known as Armageddon--will be the site of the cataclysmic battle between the forces of Christ and the Antichrist. After LaHaye and his colleagues explained the prophecies of the book of Revelation, we walked down the hill overlooking the Jezreel Valley. 'Can you imagine this entire valley filled with blood?' one of his followers asked. 'That would be a 200-mile-long river of blood, four and a half feet deep. We've done the math. That's the blood of as many as two and a half billion people.' "