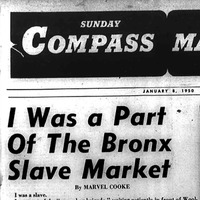 In January 1950, Marvel Cooke, the first black and only woman reporter on the staff of The New York Compass, did a reprise of a series she had done for The Crisis in 1935 with Ella Baker -- the first time this method of employing women emerged. Cooke, alone this time, posed as a domestic worker seeking employment by the hour or for a day on a Bronx street corner, where women gathered to find some kind of employment to find out what working through the "slave mart" system meant for those forced into it.

The series is often cited or reprinted as exemplary newspaper reportage.