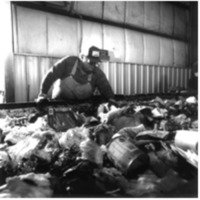 As part of an extensive Wall Street Journal report on dead-end jobs, Tony Horwitz posed as a worker in two poultry processing plants, in many ways the epitome of the "often-unseen harshness of low-wage work." The other two pieces in the Journal series, both available on the Pulitzer Prize site, do not involve undercover poses. Horwitz, however, has used the technique in previous efforts, both to investigate what was happening in the massage parlors of Fort Wayne, as a cub reporter in Indiana, here included, and to get around military restrictions during the Gulf War. He also has dressed to fit in while cultivating sources as he reported on Confederate re-enactment for his later books).

Horwitz won the 1995 Pulitzer Prize for National Reporting for this work and also was a finalist for that year's Gerald Loeb Award for Distinguished Business and Financial Journalism.

". . .But not all of the changes in the industry have bettered workers' lives. With increased automation - including, in some plants, the use of robotics and lasers - many jobs have become 'deskilled,' according to Donald Stull, a meatpacking expert at the University of Kansas in Lawrence. Workers who once followed individual cattles through the plant, performing many of the skills of a butcher, 'now stand in the same spot, making the same cut thousands of times a day,' he says. This also heightened the risk of cumulative trauma, which contributes to meatpackin'g ranking as the most dangerous industry in America. . ."