"The Woman Who Toils" - Bessie and Marie van Vorst - Everybody's 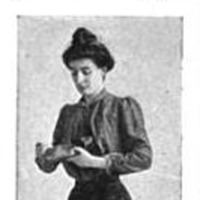 The sisters-in-law van Vorst made the circuit as ostensible factory girls from the pickle factories of Pittsburgh to the shoe factories of Lynn, Massachuetts and on to the cotton mills of North Carolina. Originally published in a series in Everybody's Magazine in 1902, it became a book, published by Doubleday, the following year. Their starting point was an unapologetic sense of superiority over the wage earners they spent months impersonating, living and working among. Reviewers were quick to point to this approach as both a plus and a minus. As for revelations, they reported on the surprising number of young women whose only reason for working in the factories was near folly -- to earn pocket money for clothes and leisure -- and how that had depressed wages and opportunity for women who needed the jobs to support themselves or their families.

Of the toiling women ruses, the work of the sisters-in-law van Vorsts was among the most successful. A book that followed their series in Everybody's Magazine became a bestseller of 1903 in the "Miscellaneous" category, holding its own for half a year against such formidable competitors as Helen Keller's "The Story of My Life" and Booker T. Washington's "Up from Slavery." The book contained their reports on additional exploits.

"Being the Experiences of Two Gentlewomen as Factory Girls"

"... it is evident that, in order to render practical aid to this class, we must live among them, discover and adopt their point of view, put ourselves in their surroundings, assume their burdens, unite with them in their daily efforts. In this way alone, and not by forcing upon them a preconceived ideal, can we do them real good, can we help them to find a moral, spiritual, aesthetic standard suited to their condition of life. Such an undertaking is impossible for most people. Sure of its utility, inspired by its practical importance, I determined to make the sacrifice it entailed, and to learn by experience and observation what these could teach. ... "

"Being the Experiences of a Literary Woman as a Working Girl"

"In the early morning the giant mill grows active. Hear it roar, shattering the stillness for half a mile! It is full now of flesh and blood, of human life and brain and fibre; it is content! Triumphantly during the long day it devours its tithe of body and soul . ... "

"On arriving in Chicago I addressed myself to the ladies of Hull House, asking for a tenement family who would take a factory girl to board. ... Before the hour was up, I had found a clean room in one street, and board in another. This was inconvenient, but safe, and comparatively healthy ..."