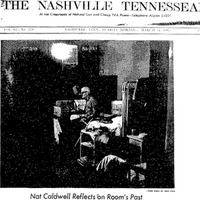 For the Nashville Tennessean in 1968, Nat Caldwell investigated Nashville's privately owned nursing homes in part by reporting above board and in part by posing as an elderly patient to spend a week at three of them.

The series brought an overwhelming response from readers, "the largest I have seen in thirty-six years as a reporter,' Caldwell wrote in a follow-up story. ONly two of the 162 letters he had received by two weeks after the series ran were "unqualifiedly unfavorable." Thirty-five years later, at Caldwell's induction into the Tennessee Hall of Fame, a press release mentioned the 1968 series on a very short list of the major achievements of his long and outstanding career. It also noted that the reporting ha led to the state licensing of such privately owned facilities.

"Nashvillians who plan to send an elderlly relative to one of this city's 26 nursing homes should be aware that they may be committing their loved ones to a crowded, unsanitary, ignored existence. " I know. I as a patient in three of them last month. "I have just finished a six weeks survey of privately owned Metro nursing homes for the elderly and for three weeks I was a patient. "What I saw shocked me."

"On Feb. 21, a white-haired, bearded, stooped 'old' man limped on an aluminum crutch into a modern nursing home in Charlotte, N.C., in company with a young lady who is his cousin."Thirty minutes later reporter Nat Caldwell of The Nashville Tennesseean was admitted to the nursing home as "Green Caldwell" (Green is his middle name) and he began playing a role which was to take him on a six-week investigation of nursing homes in the Nashville area. "His investigation saw him admitted to three homes here, posing as an elderly, arthritic and eccentric citizen without an immediate family. . . ."

"The expensively dressed woman, apparently, had interrupted a busy day to drive in to the Trimble and Roundtree Nursing Home."She was speaking to her sister and to the dingy cobwebbed room, last early residence of an old man, her uncle. I sat slumped on the bed where her uncle had slept until the night before his death. I was watching and listening. . . ."

"At Sunny View Rest Home, 1227 16th Ave., S., on the second floor, a nightmare frightened me from sleep:"Fire! Fire! Fire! . . . ONly four of the 21 patients, unaided, could possibly have walked out of the home if it were burning . . . And I, one of the four, could not help the patients get out. Despeartely, I was struggling jut to fight myself awake. . ."

"The old lady walked almost."Her pace was rapid for 83 years old, as fast as mine, impeded as I was by my crutch, and the necessity to reserve an impression. I had to appear to be patient. . . . "

"It can be done."A nursing home can be operted in one of Nashville's old brick and frame homes--at a profit-- and with all the humane considerations that--as a patient--I learned could be all important. . . . "

"The outpouring of letters responding to recent articles on Metro area nursing homes is the largest I have seen in 36 years as a reporter."Two weeks after publication of the last article, the letters still are coming in. "There were a total of 162 persons who took the trouble to write personal letters or notes commenting on the series of seven articles. One was from a soldier on duty in Vietnam and two from out-of-state readers. . . ."