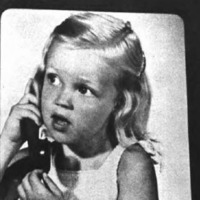 Life Magazine outed a number of medical quacks in this expose, including Antone Dietemann, with a degree in sanitary engineering, was making on-the-spot diagnoses of illnesses "with a magic wand and an array of containers that hold various body tissues." A patient he diagnosed, Jackie Metcalfe, was actually an undercover agent for the state of California. Outside in a car, Life correspondent Joseph Bride made notes, hearing everything that transpired through a radio transmitter hidden in the agent's purse. Inside, Billy Ray, a photographer for the magazine, posed as the agent's husband to document the encounter. Life collaborated with officials in exchange for the right to publish the photographs.

". . . Mrs. Jackie Metcalf was used as an undercover agent. She had Mrs. [Ruth] Drown diagnose her children, including her daugher Jeanne, by analyzing blood samples - from animals (p. 77). Then Mrs. Metcalf came back with Life photographer J. R. Eyerman as a patient and took the picture at right with a secret camera rigged in her purse. . . "

"Last week in Washington doctors and law enforcement officials from across the land met in the Second National Congress on Medical Quackery to plan a nationwide drive against a spreading evil -- an evil that costs the U.S. thousands of lives and as much as a billion dollars a year ... "

"They Grasped False Hopes to Save the Child's Eye"

"He told her, she testified at the [Marvin] Phillips trial, that cancer is a general condition of the body which can be cured only by chemical balancing. 'I can cure your child without surgery, absolutely.' . . . He cautioned them to say nothing because although he was a licensed chiropractor, he was not authorized to treat cancer."

"An Agent Works Undercover to Get the Goods"

"The Adversaries Refuse to Give Up"

"Mrs. Ruth Drown, who had been previously arrested and fined $1,000 for quackery, remained unrepentant: 'The advertising will be wonderful for me. When I get back to my office, I'll have more patients than ever.'"

"Experts Sound Off on Menace"

"A doctor is a quack when he claims to be able to cure obviously incurable diseases, and when he uses discredited or unestablished methods of treatment and makes great claims for them."