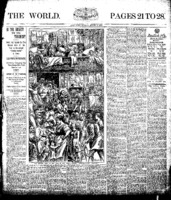 Journalism that required costuming or even physical transformation by reporters reporting on racial, ethnic, gender or social groups not their own.

"A Night in a Workhouse" - James Greenwood - Pall Mall Gazette

How the Poor Are Treated in Lambeth! The Casual Paper! "Old Daddy," The Nurse; The Bath! The Conversation of the Casuals! The Striped Shirt! The Swearing Club ! ! "Skiley" and "Toke" by Act of Parliament" ! The Adventures of a Young Thief! &c, &c, &c

". . . This mysterious figure was that of the present writer. He was bound for Lambeth workhouse, there to learn by actual experience how casual paupers are lodged and fed, and what the 'casual' is like, and what the porter who admits him, and the master who rules over him; and how the night passes with the outcasts whom we have all seen rowding about workhouse doors on cold and rainy nights. Much has been said on the subject -- on behalf of the paupers -- on behalf of the officials; but nothing by any one who, with no motive but to learn and make known the truth, had ventured the experiment of passing a night in a workhouse, and trying what it actually is to be casual. . . . "

An Adventurous Woman Goes Out Asking Alms in the Street; She Borrows Some Old Clothes; Sneaks Out of the House and Faces the World; Sixty-three Cents for a Half Day's Toil; Not a Very Hard Business; Men Didn't Contribute but Women Were Victims

"I went begging. I don't mean I got contributions to buy red flannels for the wild Africana, or sold tickets for a benefit to be given in aid of the widows and oprhans of deceased messenger boys, but that I went begging on the street in rags. I did it to find out what begging as a profession is like. ... "

"For a man who has never experienced what it is to be cribbed, cabined and confined, it is no light matter to be subjected to the machine-like direction of those who appear to be selected for the discharge of their duties principally because of their stolid indifference to all the claims and instincts of humanity."

Nellie Bly Tells of the Frolics and Breeziness After Midnight

"I went to the French Ball fully prepared to be terribly shocked. But I wasn't. If I had never been to the seashore and witnessed the bathing, or to the opera-house and seen the occupants of the boxes, I might have been. . ."

Nellie Bly Spends the Two Hottest Days of the Year in the Largest "Double Decker" in Town; 3,532 People in the Block; One Family Occupying Only Three Rooms Have Eight Boarders and Lodgers; Sleeping on the Fire-Escapes; No Scenes of Disturbance or DIsorder Among the Throngs of Over-Crowded Tenants; Strange Phases of Life in a Big City; An Interesting Chat with the Janitress of the Big Double-Decker Tenement House

"Skin Deep; Reliving 'Black Like Me': My Own Journey into the Heart of Race-Conscious America" - Joshua Solomon - Washington Post

"In February I left my parents' house to move in with my brother in Baltimore, not wanting to have to explain my change of complexion to the neighbors. I began taking six Psorien pills a day. After four sessions at a tanning salon, my face was badly swollen and my body ached. A week or so later, my brother, Jon, and I drove home to Silver Spring for dinner. The change in my skin color must have been dramatic. My 9-year-old sister screwed her face into a horrible grimaced the first time she saw me. 'You're ugly!' she cried. I wanted o smack her but realized she was not really talking about me. . . . "