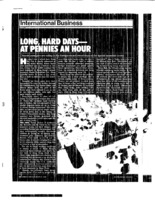 Reporters encounter or inhabit the lives of very hard-laboring others.

Life at the Wrong End of the Job Market

"Fruz and I started talking about what kind of job I could fill at the market. I had three options: to become a sweeper, a porter or a vendor.  "To work as a sweeper is the easiest job. You collect a daily salary of 400 rubles ($12) for pubshing a broom along one of the market's many rows.   "The job of porter is much harder. First, you have to pay 1,700 rubles ($52) for a black-and-orange uniform and a birka, a card that shows you have the right to work at the market. Then you have to buy a cart and pay a daily fee of 400 rubles to use it at the market. . .    "Vendors are at the top of the market's hierarchy. They just sit in the shops and sell goods. . . . "

". . .Pastor Willie's wife, Suzette, dropped him off in downtown Clarksville early Monday morning, June 17, and he lived on the street through the morning of Friday, June 21. In those four and a half days, he learned a great deal about the homeless, the working poor who face hunger daily and those in need of spiritual and emotional help. It was not comfortable. . ."

". . .An investigation by The Times into Lloyds Banking Group has found that contractors employed at its largest PPI complaint handling unit were taught how to play the system to the detriment of clients. . ."

". . .An undercover Times reporter went through the recruitment and training process to work as a complaints handler at Royal Mint Court in London.He was told that some bank salesman had faked PPI information in agreements on loan sales, and that complaint handlers should effectively turn a blind eye to the risk of fraud. . ."

Foreign workers at an Amazong 'labour camp' near Bad Hersfeld are subject to shocking and inhumane treatment.

". . .Con­trol is abso­lute: the work­ers are under 24 hour sur­veil­lance. They work under guard, they eat at the guards’ behest. They travel under guard. They are put into and taken from their rooms by guards. If they are not ready on time, either because they are asleep or in the shower, the guards enter the cramped quar­ters to hurry them on their way. . ."

"There is no cast iron guarantee of the report's authenticity -- Chinese media are not unknown to embellish reports, something 'This American Life''s Mike Daisey showed even Western media can be guilty of -- but the claims do appear to line up with previous reports of conditions at Foxconn."

A Chinese undercover reporter has documented his experiences working at Foxconn's Tai Yuan factory, presumably the production of the 'iPhone 5'

". . .Potentially reopening the controversy around Apple partner Foxconn's Chinese factories, the reporter was put through an intensive 7-day orientation, in which he was shown the living quarters, where he would eat, and how to assemble his assigned portion of the new phone model. . ."

". . .The investigation by the Mail shows that three out of eight lenders have difficulties funding the purchase of a one-bed apartment, with National Irish Bank saying it would refuse to extend a loan on them at all. Brokers the Mortgage Store and EBS Building Society both advised our reporter, posing as a 30-year-old first-time buyer earning $50,000 a year, not to invest in a one-bedroom apartment. . ."

"I Was a Slave in Puglia" - Fabrizio Gatti - L'Espresso (Italy)

Exploited. Underpaid. Lodged in filthy shacks. Beaten to death if they complain. Diary of a week in hell amidst the foreign laborers in the province of Foggia

"The boss wears a white shirt, black trousers and dusty shoes. He's from Puglia, but he hardly speaks Italian. To make himself understood he seeks the assistance of his bodyguard, a Maghrebin who is in charge of keeping everything under control in the fields. "Find out what this guy wants. If he's looking for work, tell him we don't need anyone, today." The boss speaks in dialect and drives away in his SUV. . . ."

"Recently her hours grew even more oppressive: To meet the holiday demand for Ghostbutsers, Big Hauler trains, and Mickey Mouse dolls, the girls at the Kader plan were ordered to put in one or two 24-hours shifts, with only two meal breaks, each month. . . ."