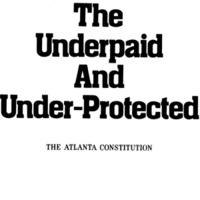 A six-part series involving reporters going undercover to work in the turpentine woods and as a motel maid as part of a deep examination of the underpaid worker in Georgia.

The series won the Grand Prize at the 1980 Robert F. Kennedy Journalism Awards

"My dear friends, I want to thank you for the excellent work on "The Underpaid And Under-Protected" series. This is a service of value which cannot be overestimated."

"He concludes that of the total number of violations of the minimum wage law, 'whether we get half of them or one-third of them is difficult to say, We just don't know.' The figures are not realistic, the government men say, because many employees either don't know they are being illegally underpaid or are afraid that complaining will cost them their jobs."

"Throughout the Atlanta Constitution's examination of the underpaid, reporters found people like Mrs. Raines whose words and work habits suggest that the old-fashioned American work ethic survives at the lowest-paid level of the work force."

"The wage and hour case 'was a matter where the wage-hour office said a person couldn't come in a store and take off his coat and go to the bathroom without being on the payroll. It was not a question of taking advantage of anybody; nobody had ever argued about it; we weren't trapped or caught or anything.'"

"The Atlanta-based conglomerate, whose holdings lie throughout the Southeast and beyond, changed both its primary business and its corporate name over these decades. It first grew into one of the nation's largest manufacturers of ice; then, when that market soured, it innovatively entered the emerging field of convenience stores and became a national leader in that endeavor."

"After her first three days on the job, Agnes had worked a full 24 hours. Her total pay, as recorded on her check, came out to $69.50, or $2.90 an hour, the minimum wage. No money was taken out for income or state taxes; there was, however, a $4.27 deduction for Social Security."

"My husband bought this place, it will be three years ago in February," Mrs. Love said. "We had three flower shops in Michigan, then the next thing I knew we were here. It didn't bother me, though. Georgia's my home."

"No one expects a maid to earn much money. Traditionally, the domestic -- performing menial household chores which most women do for free on a daily basis in their own homes -- has been in the lowest category of wage earner."Today, thousands of women are paid below the federal minimum wage standard -- sometimes legally, sometimes illegally -- to clean rooms in motels and hotels across America. The motel maids comprise one of the nation's largest, and most visible groups of underpaid workers."

"No Golden Eggs in Georgia's Chicken Sheds: Whole Families Labor On Poultry Farms to Earn Paycheck of a Single Workman""

"A whole family working for the normal salary of one person is not uncommon in north Georgia chicken country. Scores of other families work the same way on the chicken farms dotting the rolling pastureland. They are provided with houses similar to the Babbs', close to similar chicken sheds, and are paid a single weekly salary, commonly between $100 and $125, to look after the layers and collect the eggs."

"Naval Stores Ages-Old, but Few Like Living in the Past"

"The uses of the gum have changed. But to a remarkable degree, the naval stores or turpenting industry has not changed. Centuries after its founding in the colonies, the industry still is virtually without mechanization and almost totally dependent on hand labor. The laborers, almost all of them still black, work for pay often below current standards."

"The money paid in turpentining is not much when matched against contemporary pay standards, even the minimum wage. Turpentining is one of America's oldest industries—started soon after colonization, then flourishing in the woods of the Southeast under slavery—and, to a remarkable degree, the industry has resisted both mechanization and social change. . . . "

"Jim Palmer: He Recalls Bad Days in the Woods"

"The bosses treated you mean back then. If you didn't do it, you wouldn't get nothin', and if you did do it, you'd only get half of what you did. They used to beat 'em, used to kill 'em, they used to do everything to colored. I was on a job once in Blue Creek, Florida. Ain't no timber there now. Well, the 'skeeters was so bad, people jus' wouldn't work, and 'cause the people wouldn't take the 'skeeters, the man would go to the house and beat 'em up, jump on their wives, wouldn't allow them to come back."

"Like the men who work for him, gathering gum from the pine trees around Hoboken, Oscar 'Junior' Sears was born into the turpentine industry. He noted with some pride that his daddy, as a turpentine boss, 'raised' some of the current laborers. For more than a decade, Sears leased turpentine rights to 80,000 trees . . ."

"For Many Americans, Work Pays Off in Poverty"

"At a time when wages are at an historic high, hundreds of thousands of American workers laboring in menial jobs are underpaid."The federal minimum wage standard holds little value for these workers. The underpaid work quietly in industries hidden from view of the overburdened agencies charged with enforcing the minimum wage, in jobs which fall out of reach of the wage-hour laws, or for employers who brazenly disregard minimum wage standards. . . . "

"Brackish swamp water rises above Clifford Giles' ankles, and thorny brush pulls at his broad shoulders and back as he makes his way from one towering pine to another, bucket in hand. It is midsummer in the south Georgia woods, hot — very hot — and steamy. Giles, with an irritated grunt, slaps at his face to chase away the swarming mosquitos and horseflies. Sweat pours from his body."

"This six-part report on 'The Underpaid and Under-Protected' was researched by Paul Lieberman, Chester Goolrick, Lee May, Charlene Smith-Williams and Steve Johnson. The articles were written by Lieberman and Goolrick. All of the pictures for the first two day's reports were photographed by Calvin Cruce."The series won the 1980 Grand Prize in the Robert F. Kennedy Journalism Awards."