The mortal remains of John Brown were brought to this city on the Amboy boat, on Saturday evening, in the charge of J. Miller McKim, esq., of Philadelphia, one of the gentlemen who accompanied Mrs. Brown to Harper's Ferry for the purpose of receiving them from the authorities of Virginia. The intention, at first, was to stop over Sunday in Philadelphia, partly that the body might, as soon as possible, receive the attention of an undertaker, and partly that Mrs. Brown might have opportunity for rest, after the terrible ordeal through which she had passed; but the prospect of the body's approach produced such an excitement in that city - an excitement of enthusiasm among his admirers, and of curiosity on the part of the people generally - that the Mayor believed it would be impossible if the body should remain, to preserve that order which the decencies of the occasion and a proper regard for the feelings of the afflicted window required, and therefore be peremptorily insisted that another stopping-place should be selected.

Description:Written after John Brown's execution, this article details the shipment of Brown's remains back to New York. It then goes on to summarize the days leading to his death. Although not signed, the author was later revealed to be Tribune's junior reporter Henry S. Olcott, who managed to witness the execution by going undercover as a member of a southern militia. 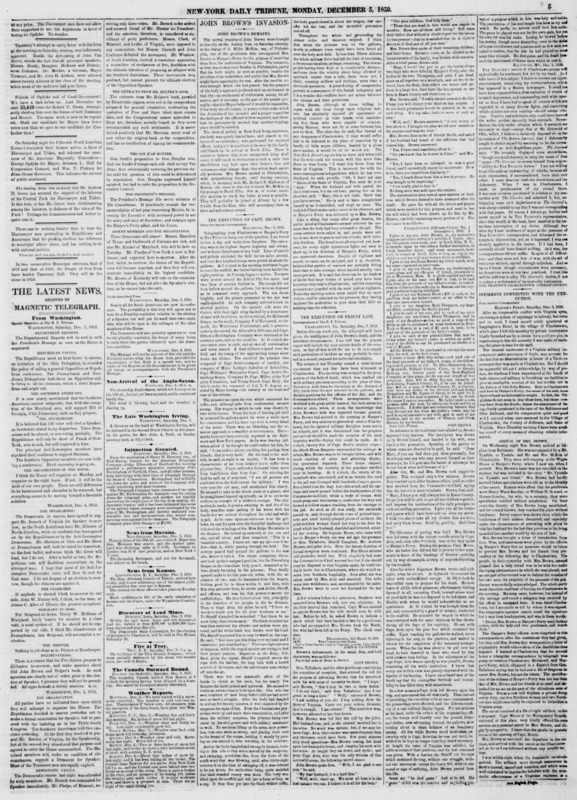