Meet the Medicaid Kings: Two men from Long Island who in three years parlayed a corner dental office on W. 125th St. in Harlem into a multimillion-dollar medicaid conglomerate, the biggest in the city, offering services from allergy care to methadone and piercing ears.According to Health Department records, examined by The News as part of an investigation of medicaid, the top billing center in the city is run by Benjamin Schneider, 57, and his brother-in-law, Victor Marcus, 58. Back in 1946, soon after they were discharged from the army, Schneider and Marcus started to practice dentistry at 79 W. 125th St. Twenty-three years later, medicaid came to Harlem, and today, Schneider, who lives in Woodmere, and Marcus of Roslyn, preside over the BenVic Corp.

Description:The seventh installment of a Pulitzer-prize-winning series exposing medicaid fraud by New York Daily News reporter William Sherman. This article concentrates on the questionable practices of a one-stop-Medicaid-shop in Harlem, that was the top billing center for medicaid for the year of 1972. 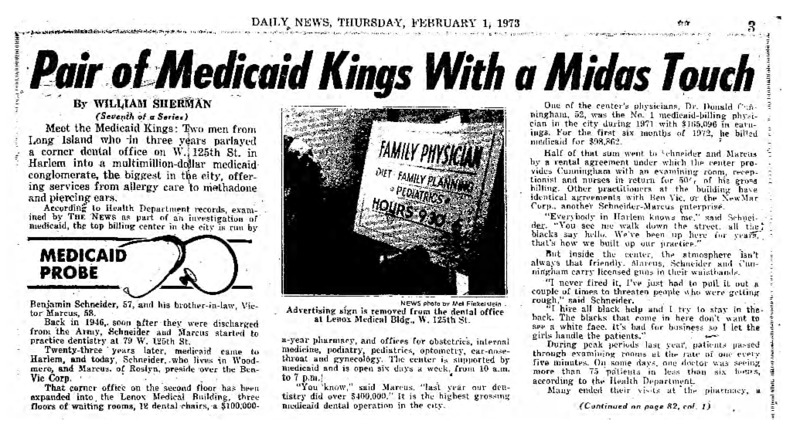