Tony parked his camper in the usual spot, across the street from the Woodward & Lorthrop department store, and stepped out into the freezing rain.  It was 5:30 on Wednesday evening, four days before Christmas.  There were 50 to 60 people along The Avenue.  Some were boarding vans and campers such as as Tony's that were bound for Lorton Reformatory, and others, holiday shoppers, were waiting for the next Metrobus to take them home.  His hands in his pockets, shoulders hunched against the sleet, Tony walked down to the corner to see another veteran driver, a paraplegic known on the street as Donald.  They chatted for a few minutes, Donald up in the seat behind the steering wheel of his van parked near 11th and G, Tony leaning against the side window.  A third man appeared out of the darkness and confronted Tony in the roadway.  They exchanged a few words.  The man went into a boxer's crouch, clenched his fists, and punched Tony in the head, knocking him to the pavement, according to reports.  The blows were delivered with such swiftness that Tony never got his hands out of his pockets. 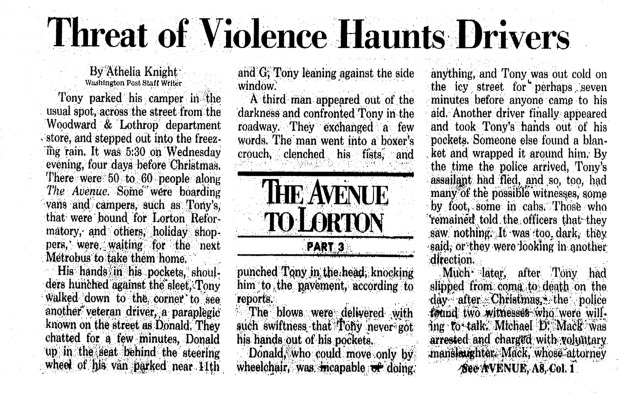