The Washington press corps is too busy cozying up to the people it covers to get at the truth.

EARLIER THIS YEAR, I put on a brand-new tailored suit, picked up a sleek leather briefcase and headed to downtown Washington for meetings with some of the city's most prominent lobbyists. I had contacted their firms several weeks earlier, pretending to be the representative of a London-based energy company with business interests in Turkmenistan. I told them I wanted to hire the services of a firm to burnish that country's image.I didn't mention that Turkmenistan is run by an ugly, neo-Stalinist regime. They surely knew that, and besides, they didn't care. As I explained in this month's issue of Harper's Magazine, the lobbyists I met at Cassidy & Associates and APCO were more than eager to help out. In exchange for fees of up to $1.5 million a year, they offered to send congressional delegations to Turkmenistan and write and plant opinion pieces in newspapers under the names of academics and think-tank experts they would recruit. They even offered to set up supposedly "independent" media events in Washington that would promote Turkmenistan (the agenda and speakers would actually be determined by the lobbyists).   All this, Cassidy and APCO promised, could be done quietly and unobtrusively, because the law that regulates foreign lobbyists is so flimsy that the firms would be required to reveal little information in their public disclosure forms. Now, in a fabulous bit of irony, my article about the unethical behavior of lobbying firms has become, for some in the media, a story about my ethics in reporting the story. The lobbyists have attacked the story and me personally, saying that it was unethical of me to misrepresent myself when I went to speak to them.

Description:Ken Silverstein explains and defends his reasons for going undercover for his Harper's piece on the excesses of Washington lobbyists. 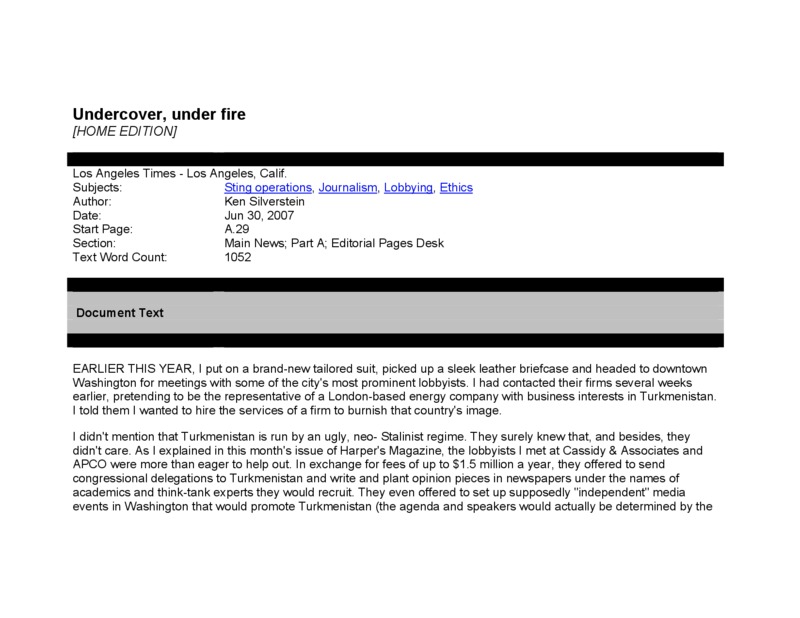