Instant messaging on the computer has become the phone for kids today. Children spend hours chatting online with their friends, and sometimes with strangers. A recent study found that one in five children online is approached by a sexual predator, a predator who may try to set up a face-to-face meeting. In a Dateline hidden camera investigation, correspondent Chris Hansen catches some of these men in the act. Also, scroll to the bottom of the page for the software mentioned in the story and more resources. To follow the trail of an Internet predator prowling for children, from seduction in a chat room to a face-to-face meeting, Dateline rented a house, wired it with hidden cameras, and enlisted the help of an online vigilante group called "Perverted Justice." Volunteers from the group posed as teens in chat rooms, saying they were home alone and interested in sex. Within hours there were men literally lining up at our door. The men who turned up in our investigation included a New York City firefighter and a man with a history of mental illness and a criminal record. And they all had something in common: the same excuse. Just about every man who came to our house said it was the first time he had done something like this and most claimed they really had no intention of having sex with a minor. Here's an excerpt of what we found: Steve, 35, thinks he's got a hot date with a 14-year-old girl. Instead he'll be meeting Dateline NBC correspondent Chris Hansen. At first he seems to think I am a police officer. I haven’t told him yet that I'm a television reporter and at this point he has no idea he's being videotaped.

Description:The first story done by Dateline NBC in the "To Catch A Predator" model. Dateline NBC collaborated with an activist group called Perverted Justice to make the story and set up the stings. 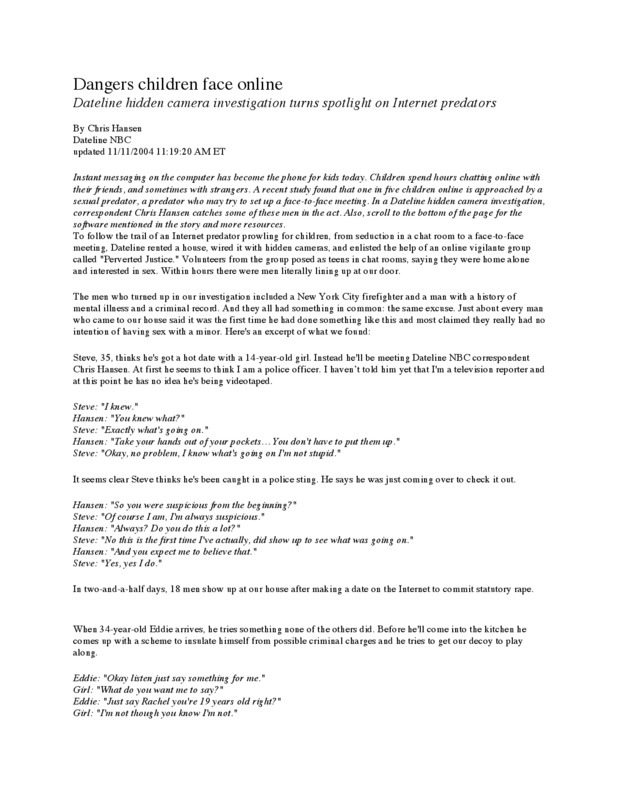