A long line of visitors expected to find a young teen they'd been chatting with online, home alone. Instead, they found Dateline cameras

In any home where there are kids with computers, there are parents with concerns. Teenagers can spend hours chatting online, but who are they chatting with? On the other end of that instant message could be a complete stranger — or a sexual predator. It's a dangerous side of the Internet, one that's growing and many children are at risk. So we went undercover, filling a house with hidden cameras. Soon, a long line of visitors came knocking, expecting to find a young teenager they'd been chatting with on the Internet, home alone. Instead, they found Dateline. We want to warn you some of what you'll read is explicit.  But parents need to know what their kids can confront when they sit down at the computer. The problem seems to be getting worse — and the profile of the suspected predators more frightening. Just this past summer, an editor for “Weekly Reader,” a newspaper for school children was arrested for using the Internet to solicit sex with a 14-year-old boy. He pleaded not guilty. And this past spring, a New York City cop, a youth officer, was also caught attempting to meet a child online for sex. He pleaded guilty last month “to attempted use of a child in a sexual performance” and agreed to serve six months in prison. Law enforcement officials estimate that 50,000 predators are online at any given moment. And the number of reports of children being solicited for sex is growing says Michele Collins of the National Center for Missing and Exploited Children.

Description:The second hidden camera story in the "To Catch A Predator" model. 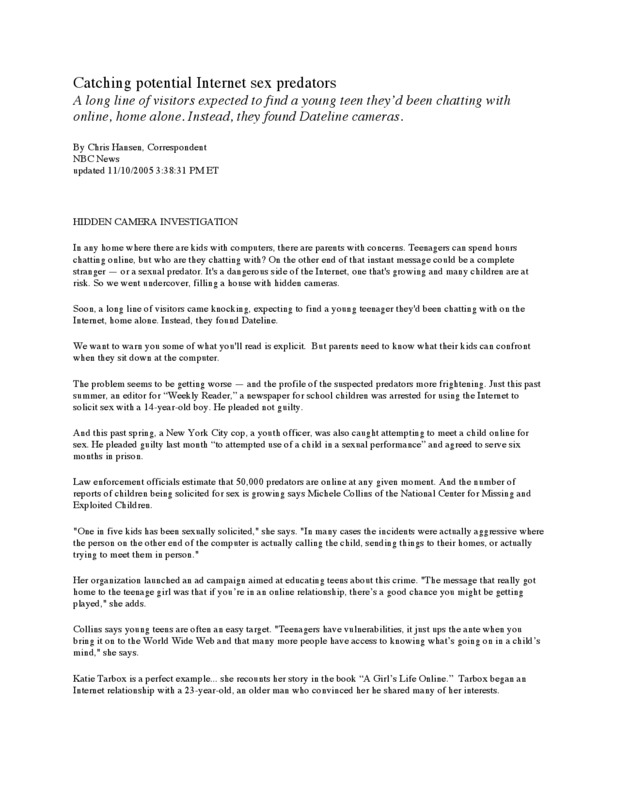