“To Catch a Predator” is propping up NBC’s Dateline, but at what cost?

"It was just before 3 p.m. on a Sunday afternoon last November when a contingent of police gathered outside the home of Louis Conradt Jr., a longtime county prosecutor living in the small community of Terrell, Texas, just east of Dallas. Though the fifty-six-year-old Conradt was a colleague of some of the officers, they hadn’t come to discuss a case or for a backyard barbeque. Rather, the veteran district attorney, who had prosecuted hundreds of felonies during more than two decades in law enforcement, was himself the target of an unusual criminal probe. For weeks the police in the nearby town of Murphy had been working with the online watchdog group Perverted Justice and producers from Dateline NBC’s popular “To Catch a Predator” series in an elaborate sting operation targeting adults cruising the Internet to solicit sex from minors. Dateline had leased a house in an upscale subdivision, outfitted it with multiple hidden cameras, and hired actors to impersonate minors to help lure suspects into the trap. As with several similar operations previously conducted by Dateline, there was no shortage of men looking to score with underage boys and girls. In all, twenty-four men were caught in the Murphy sting, including a retired doctor, a traveling businessman, a school teacher, and a Navy veteran . . ."

Description:A criticism of the hidden costs of the popular NBC Dateline series, To Catch A Predator 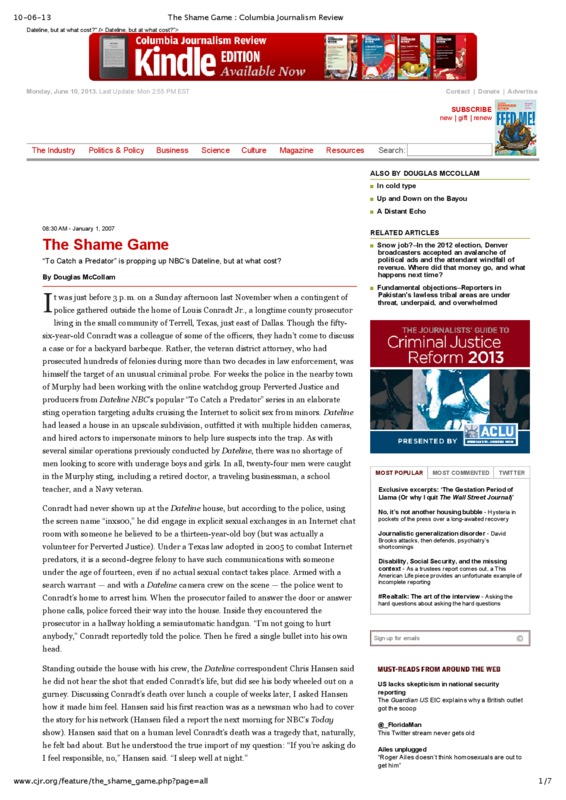