Make no mistake about the quality of the operation over at the union-organized Ernst Strauss Inc.  The shop, maker of very expensive, fine-quality women's suits and coats, is considered the best in Los Angeles.  Ask garment industry leaders, union officals, ask the owners themselves.  "The pay is the highest in California - maybe the country," said one owner.  "The workers are so loyal you couldn't beat them away. " said another.  "It's a union shop," explained someone from the International Ladie's Garment Worker's Union.  "A 30-year member. Everything is done right."  But "right in the undisputed best shop in town is a relative term.  On June 12, a Thursday, I went to work as a sewing machine operator in Ernst Strauss factory.  As before, I posed as a poor, illegal brazillian germent worker. I no speak English. Espanol, por favor.

Description:Wolin, as part of her investigative series on Los Angeles's garment industry, is hired to work in a union shop, posing undercover as a poor undocumented garment worker in Los Angeles. 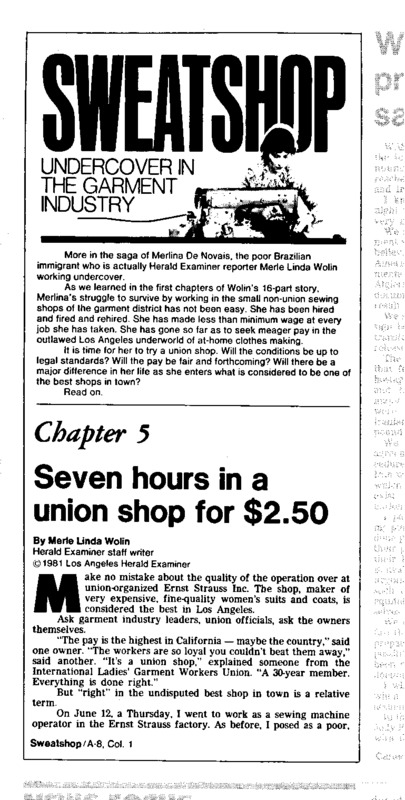