As far as Los Angeles Mayor Tom Bradley is concerned, the violations in the city's garment industry are nothing to get excited about - a belief his critics charge is part of the problem.  "The mayor's office does virtually nothing to enforce the laws 0that apply to the garment industry)," said state Sen Joseph B Montoya, D-San Gabriel Valley, the legislator best known in Sacra-mento for his efforts to legally protect the garment worker.  "He showed interest only where there was a media event.  Why? There's a lot of money involved, a lot of contributions. You don't want to hamper your political campaign fund,  That's what it boils down to."   "It's kind of lonely out here," said state Labor Commissioner James Quillin who, as head of California's Concentrated Enforcement Program, tries to curb abuses in the garment industry. "The (city) Fire Department and the (city)  Building and Safety Department ought to be out here... but Bradley will talk about his reluctance to take any steps that might be construed as punitive agaist the industry. He'll say it is such an economic factor in the city."   Surprisingly, even manufactur-ers complain about the mayor, citing his reluctance to impose requirements on contractors beyond a $21 business tax and registration permit.  "I asked Mayor Bradley if there would be something these people (garment contractors) could read in five languages that would explain what their obligations are as employers," said Bernie Brown, the spokesman for California's Coalition of Apparel Industries,  the most powerful manufacturers' lobby in the state. "I never heard from him.  No one has the answer yet."

Description:Wolin interviews LA's Mayor Bradley about the working conditions and lack of regulation she found while posing undercover as an immigrant garment worker in the city's factories. 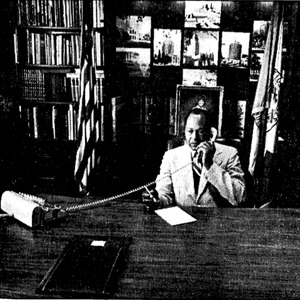 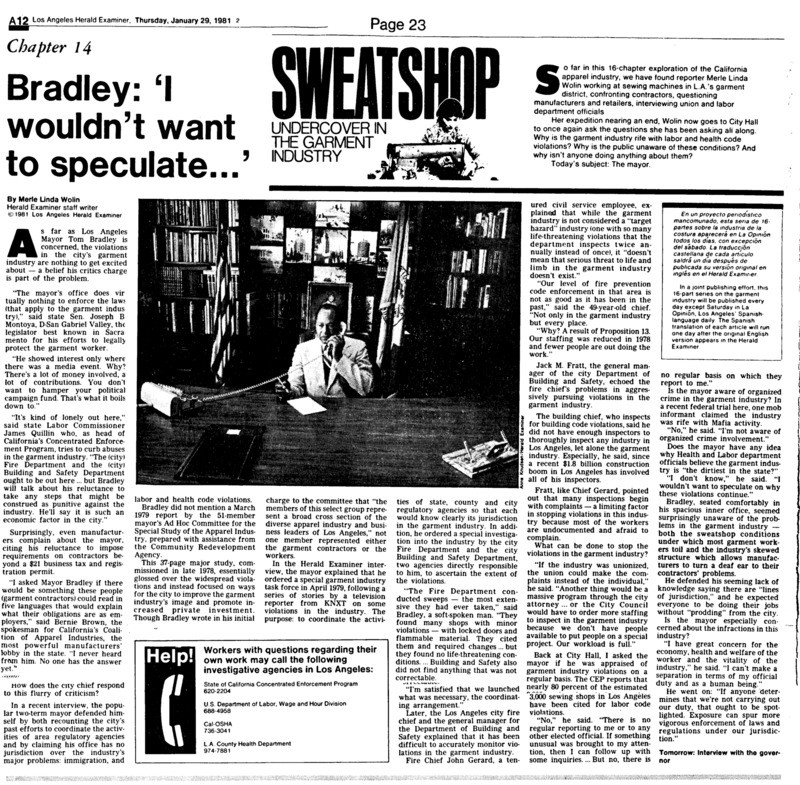