"The Fool on the Hill" - Craig Unger - Huffington Post

"Now that Mike Huckabee has joined the top tier of Republican candidates, it's worth taking a closer look at one of his chief evangelical supporters, Tim LaHaye, the bestselling Rapturite co-author of the Left Behind series (63 million copies sold!). As it happens, in researching my new book The Fall of the House of Bush (for more information, go to http://www.craigunger.com, I traveled undercover with LaHaye and about 90 American evangelical Christians to the Holy Land for the "Walking Where Jesus Walked" tour in 2005.  The most astonishing moment of my journey took place when we reached Megiddo, Israel. Alexander the Great, Saladin, Napoleon, and other renowned warriors all fought great battles there. But according to the book of Revelation, the hill of Megiddo--better known as Armageddon--will be the site of the cataclysmic battle between the forces of Christ and the Antichrist. After LaHaye and his colleagues explained the prophecies of the book of Revelation, we walked down the hill overlooking the Jezreel Valley. 'Can you imagine this entire valley filled with blood?' one of his followers asked. 'That would be a 200-mile-long river of blood, four and a half feet deep. We've done the math. That's the blood of as many as two and a half billion people.' "

Description:Unger describes his reporting methods for his book, The Fall of the House of Bush, which looks at the followers of Tim LaHaye. 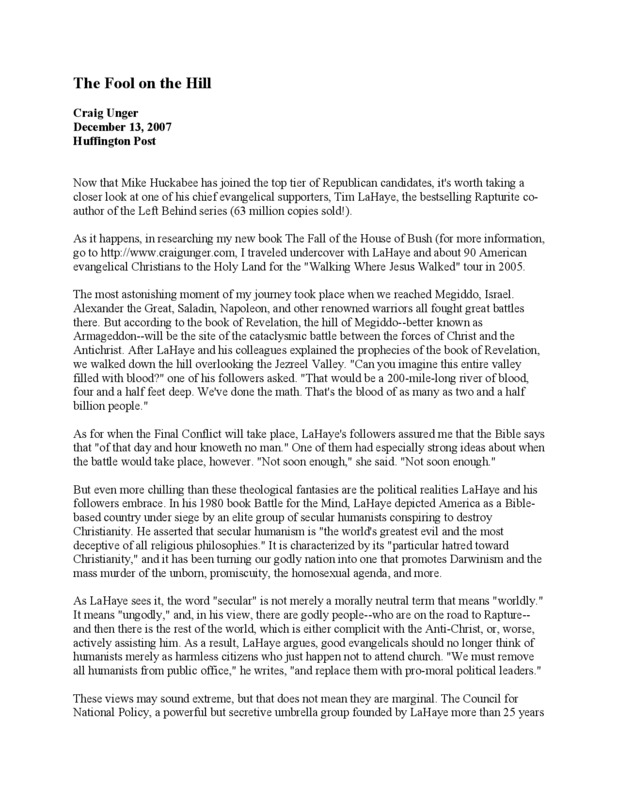