". . .I was walking the same floors that three other guards had walked before they were stabbed and beaten to death less than three months earlier.This was the Pontiac prison's North Cell House, and all around were eerie reminders of the July 22nd riot.  Only recently had plastic been put up to cover the broken windows. The four-tier cell house was lit by only a handful of bulbs; there should have been 10 times as many, but no one had replaced the smashed lights or repaired the wiring. . ."

Description:The second of three articles from the Tribune published in the Independent, based on Recktenwald's undercover time spent as a guard in Pontiac Prison. 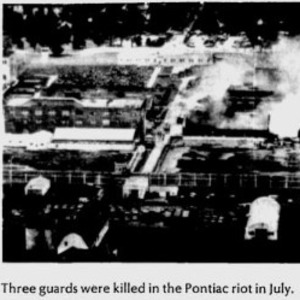