"On August 14, Julius Chambers, a reporter of THE TRIBUNE, was consigned to Bloomingdale Lunatic Asylum by regular process of law, and was placed by the Assistant Physician in charge in the wards for excited patients, being thought a dangerous maniac. At the end of the week he appeared (by instruction of this office) to be so much improved that he was removed to the ward for quiet patients, and encouragement was held out by the same physician that in six or seven weeks he might be discharged. On Saturday last, after a write of habeus corpus for his release had been served, Dr. David T. Brown, Superintendent of the institution, talked with him for an hour or two, and, being familiar with the disease which he simulated, at once saw the reporter was sane. On Monday, at the earnest solicitation of the physician and the legal adviser of the Asylum, consent was given that he be released without further public legal proceedings. Yesterday, however, Mr John D. Townsend, in whose name the application for release was made, explained in the Supreme Court his connection with the case and the fact that the person committed was a reporter for this paper."The reporter's story of his incarceration in the Asylum will be told in detail in tomorrow's TRIBUNE, accompanied by his sworn affidavid of the truth of all he states. "In making this investigation of this institution, THE TRIBUNE was prompted by no motive of idle curiosity, no purpose to misrepresent, no object other than xxxxxx correct way, and in a manner which would satisfy and convince the public. Its examination was made on a fixed and carefully elaborated plan to test the legal issues involved, and the truth of the charges previously put forth by former employes of the Asylum. To have bribed two physicians to certify falsely his madness would have been to prove only tht there were rogues in the profession; hence it was decided to feign insanity and test the scientific knowledge of the committing physicians. . . . It was charged that strangers to patients sometimes committed them. It was therefore decided that absolute strangers should be employed. It was said that police justices committed men without examination. The Justice who sent our reporter to Bloomingdale never saw him at all, and does not know the names of the persons or physicians who made the application . . . The detailed story of those adventures to be told by the reporter will be a plain, unvarnished tale, without reservation of names or facts, and we are sorry to say that it will be adverse to the institution, and reflect painfully on the law of commitment and its administration in this city."

Description:Curtain-raiser and explanation for the undercover investigation of the Bloomingdale Lunatic Asylum by reporter Julius Chambers, to be published August 31, 1872. 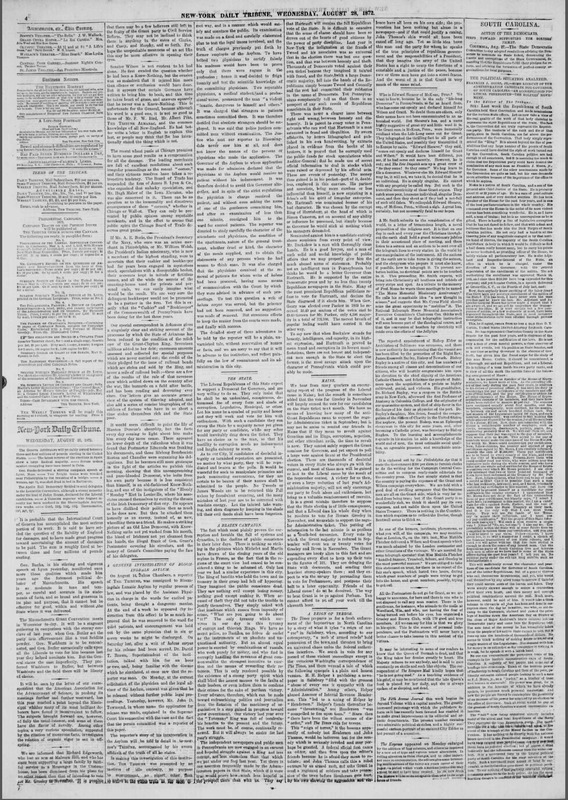