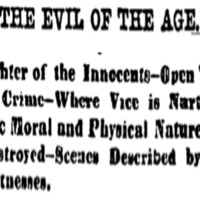 Rosenzweig the Abortionist - His Fruitless Attempts to Get out on Bail

"JACOB ROSENZWEIG, the abortionist doctor, charged with the homicide of the unfortunate MISS BOWLSBY, of Paterson, N.J., was yesterday brought before Judge CARDOZO, of the Supreme Court, on a motion to admit him to bail. . . . "

More evidence proving the identity of ALICE BOWLSBY, and establishing the guilt of the monster ROSENZWEIG, was discovered yesterday. Sergt. ROONEY, in searching the house of ROSENZWEIG, at No. 687 Second-avenue, found a false bosom, such as is used by women. Taking it, with other female wearing apparel, to the servant girl Jane Johnson, now at Bellevue Hospital, he asked Jane if it belonged to her. Jane said that it did not . . . . "

Later Developments in Regard to the Trunk Tragedy. Important Admissions of Rosenzweig's Servant. All Doubt of the Identity of the Victim Removed. Sketch of the Life of Miss Alice Bowlby. Suicide at Paterson, N.J., of Her Supposed Destroyer. The Brooklyn Abortionists Held for Examination.

"... She was a young girl whose life had apparently never been darkened, and upon whom the breath of suspicion had never fallen. Moving in respectable society, and having relatives in the highest circles, she was everywhere received as an ornament and a delight. . . ."

Satisfactory Progress in Developing the Trunk Mystery. Discovery of the Truckman Through the Published Accounts. ARREST OF THE ABORTIONIST. Sketch of the Prisoner and His Infamous Career. All Efforts to Identify the Victim Unavailing. THE TRUCKMAN FOUND AT LAST. PICKET'S STORY. KOSENZWEIG'S ARREST EFFECTED.. THE TRUCKMAN MAKES A DETAILED STATEMENT. ROSENZWEIG INTERROGATED SEEKING TO IDENTIFY THE VICTIM.