Report: "The Shame of the Prisons"- Ben Bagdikian - Washington Post

". . .The 12-year-old boy thought he was alone in the dormitory of Cottage 7, sweeping under the beds.  But he wasn't alone.  A creaking wooden floorboard caused him to turn.  A 14-year-old fellow inmate of the old Industrial Home School For Colored boys (now Junior Village) was sneaking up behind him.  "He said he'd been watching me and said I was either going to fight him or let him have sex with me," Lawrence Smith Jr. recalls.  Smith refused.  The bigger boy grabbed him.  Smith pushed back.  They fought and Smith says he won that battle.  This was one boy's introduction, 18 years ago, to the world of District of Columbia "corrections" - to sexual assaults, fights and beatings behind the walls of institutions where juveniles and adults from Washington have been sent for the announced purpose of being rehabilitated. . ."

Description:An article outlining and examining the effectiveness of various rehabilitation methods for prisoners in the District of Columbia corrections system, with a focus on halfway houses. 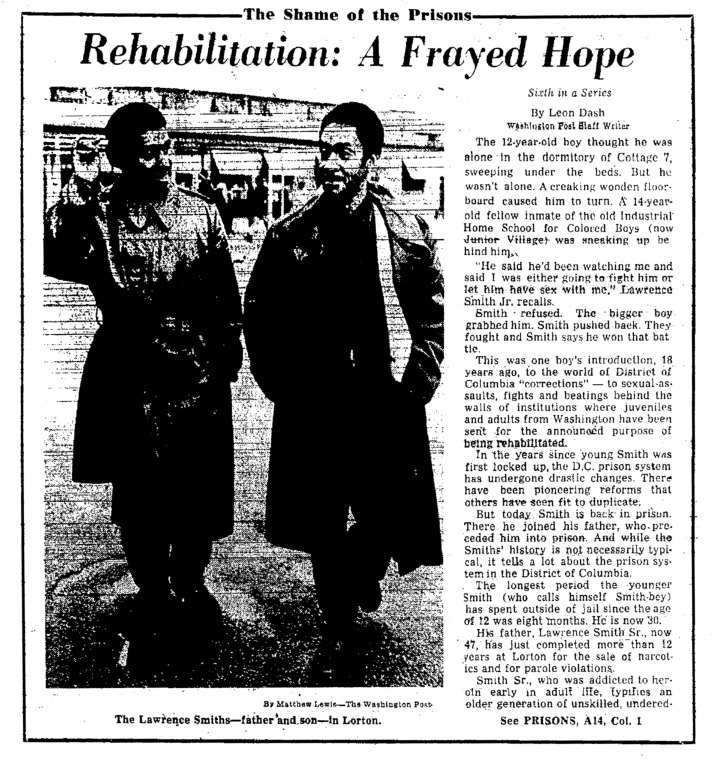