A Lady Reporter's Experience in the Shops with the Sewing Serfs. Making Tidies at Sixty Cents a Dozen and Paying Three Dollars for the Privilege

Tuesday, July 10, according to instructions from THE TIMES, I made up for the role of shop-girl and with a list of factories in one hand and gentle peace in the other sailed down State street under a brown braize veil as impenetrable as an iron mask, I applied at two feather factories and three corset shopws, but aside from the exercise up and down several flights of stairs got nothing.  The feather people did not need any help and the corset folks had not yet started on the winter trade.  I was treated with civility, however, and given permission to "drop in in a week or so."  The fifth place on my list was the "Western Lace Manufacturing Co.," 218 State street.  Ascending one flight of stairs I stopped to take off my veil and adjust my eyes to the low light.  That done I looked about and finding a door marked "Office of the Western Lace Manufacturing Co." with "Come In" On the glass I complied.  A young girl followed and leaving her to close the door, I fell into a chair, the only one about, and proceeded to perspire and scrutinize the place.  The office was not uninviting.  The floor had cheap carpet, the ceiling was high and the room well ventilated and admirably lighted.  On a long table, that served as a sort of fortification for the private office of the company, were the samples - "antique crocheted goods" - as they are listed, in various shades of white.  All were of different pattern and unvarying ugliness.  There were round tidies and oblong tidies, square mats for a bureau and smaller ones of oval and circular design, intended for a lamp or cusion.  Behind the table, secheting between a writing stand and a desk, was a young man of 30 or so, of the blonde type, with a stationary scowl between his eyebrows and an otherwise pleasing manner.  That is, I thought the manner pleasing until I began to get acquainted with it and then my opinion changed.  After a lapse of five minutes or so, the fair-haired gentleman turned to the young girl with a deeping of the scowl and a must unalluring "Well?"

Description:The first in Nell Nelson's series based on time undercover in factories employing girls and women in Chicago. The description of the series, printed in the Times, reads: "...These articles are written by a young lady who passed through the common experiences of those unfortunates of her own sex who are compelled to undergo the hardships and tortures of factory life in this city. She tells plainly what she saw and what she heard; gives names and places whenever necessary, and backs up her statements with unquestionable proofs." 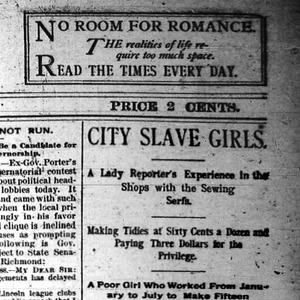 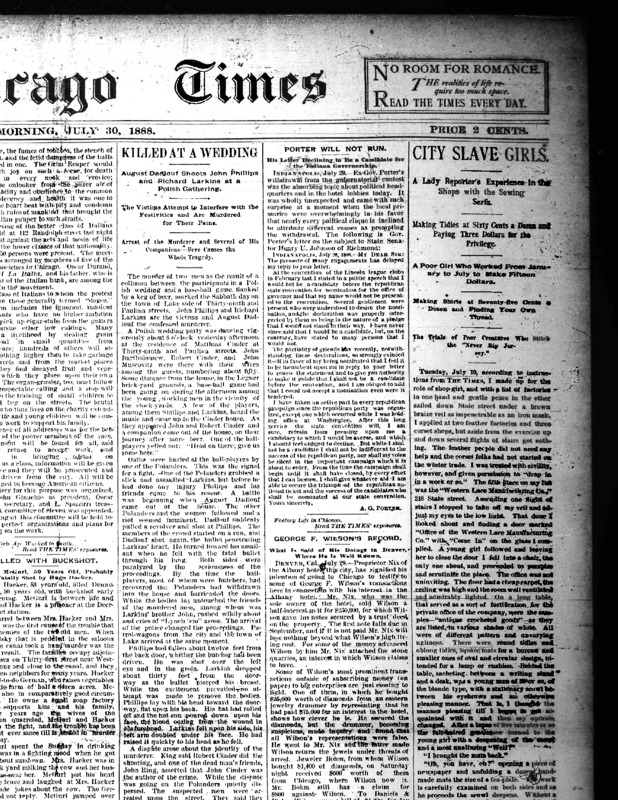