"Nell Nelson" investigates the Boston Store and Is Shocked at What She Finds. A Basement that on a Hot Day is So Stifling it Reminds One of the "Black Hole of Calcutta."

For dismal surroundings, economy of comforts, and heartless treatment, to the Boston store belongs the palm.  I did not work in that establishment although I tried very hard to do so.  I was in the store at 8 o'clock on Friday morning as arranged with Mr. Hillman, who had partially promised to hire me.  "One of the girls in the hoisery department," he had said "is sick, and if she doesn't come back Friday morning I will try you."  I could not find the gentleman, although I hunted the main floor and the floors above and below.  My plan of fluctuation was to take the elevator up one story and walk down, and then ride up two and walk down the third flight, in that way I took in the entire store and a great part of the employees.  I began at the bottom and spent a full hour in the basement, where I saw so much and suffered so much that the upper floors had no surprised for me.  In the first place the atmosphere was almost unendurable.   Hot! It must have been 100 degrees above! Out in the open air not a breeze was stirring and the heat was sizzling.  Down where I was I could not see a single opening to admit the air, firey as it was, excepting the open door at the extreme south-east corner of the floor, leading up a short flight of steps to the sidewalk.

Description:The undercover series continues its expose of working conditions for women in Chicago's factories. Nell Nelson posed as a laborer looking for work (and working) at several factories in the city. 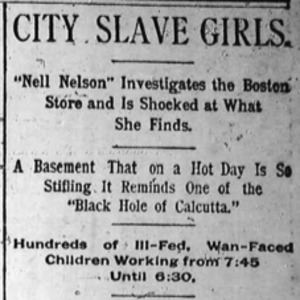 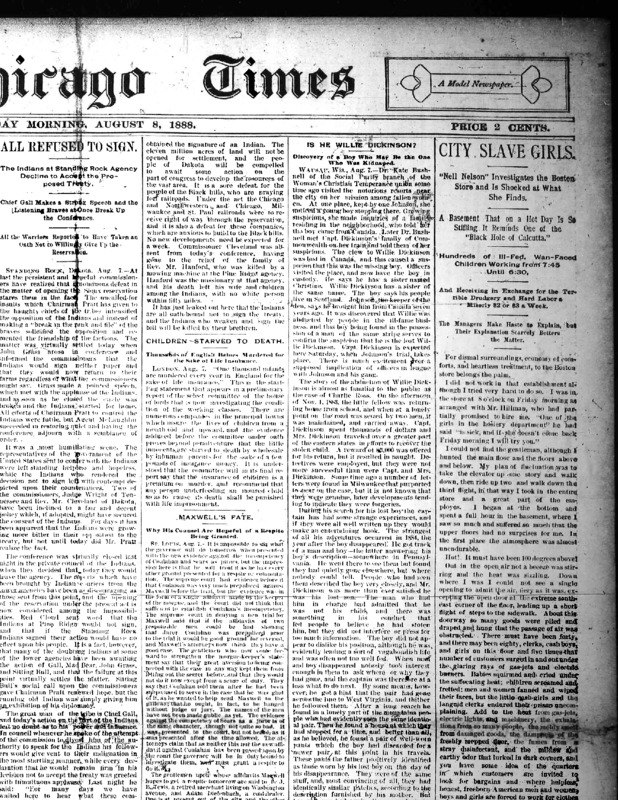