"Nell Nelson" spends a Day Among the Serfs and Bondwomen in the Shops of "Little Hell." For Four Hours of Unceasing Toil in a Dirty, Crowded Tailor's Room She Is Paid Six Cents.

It was 7 a.m. by all the whistles in "Little Hell" when I reached that section of the city in search of an opening in a slop-shop.  The streets were crowded with shop hands hurrying to their day's work - men and boys with pipes in their mouths carrying dinner pails or lunch baskets; little girls in groups of two and three in beggarly rags; young women and old women, some of them white-haired and stooped with age, wearing shawls about their heads and shoulders and the meanest apologies for shoes.  Many girls were bare-headed and some went through the streets in old skirts and dilapidated waists that had neither collar nor sleeves.   At the corner of Elm and Wesson streets is an immense tailor shop into which the girls fairly swarmed, some going into the main and some into the rear building. Both buildings have three stories, each containing a shop under a different "boss." I followed the crowd through both buildings beginning in the basement and going up and up and up the narrow, dirty covered stairs, stopping on each floor to see the "boss" and apply for work.  No success.  The vest shops were full and so were the trousers shops.  In the jacket shop there was room for experienced hands only at the munificent salary of $3 a week.  The garments were cut and the sewer had the entire making.

Description:"Nell Nelson" finds work in a slop shop for a day, making ready-made clothes for a measly wage, part of her undercover series on working conditions for women and children in Chicago's factories. 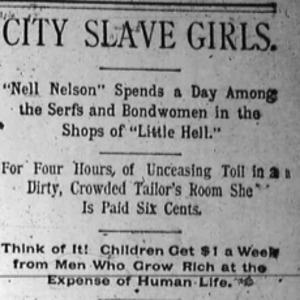 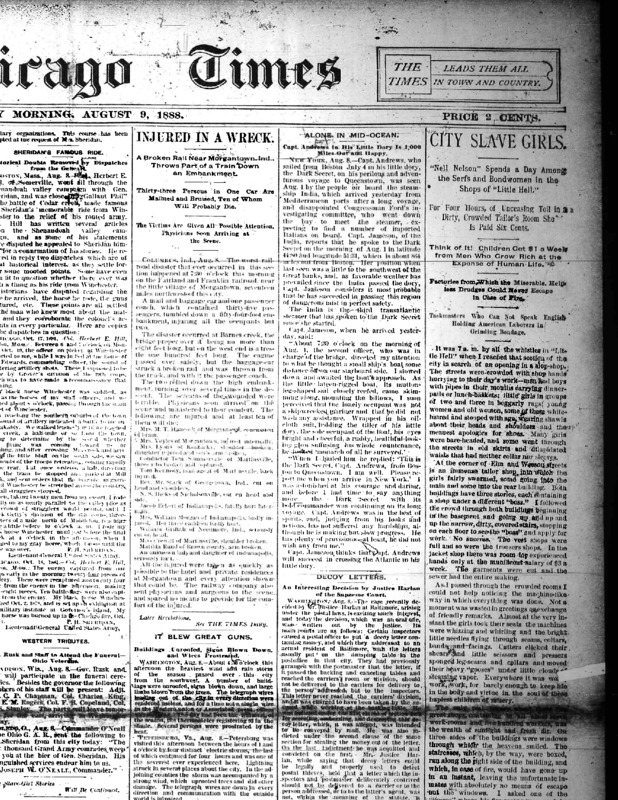