Places Where Virtue Counts for Nothing and Is Not Tolerated by the Employer. Body and Soul Must Be Given Up To The Scoundrels Or The Employee Loses Her Situation.

"Do you want 'to visit a manufacturing establishment, generally held in high repute, where a girl's tenure of place depends upon the degrading concessions she may be induced to make to her employer?'" The question was put to a reporter for The TIMES by Inspector George Bodgers of the health department.  They had just formed a temporary copartnership under the name and style of "we" to make a thorough examination of the hells and holes where human beings hive, delve, and thrive or die under the guise of 'employes'. [sic] "Well, I'll tell you the story and I know it to be true and so does my wife. A girl of good development and modest demeanor had for some time been employed in a book bindery and had become fairly well-skilled.  One afternoon she turned in, as the result of her day's work, four books.  The foreman complained that the work was imperfect - in fact, that the books were spoiled, and told the girl she must pay for them.  She asked for particulars but could get little satisfaction.  She became indignant and was thrust aside.  Remembering that other mouths than hers were awaiting the food her scanty earnings must purchase she pleaded first for justice and then for mercy. "You quit work with the rest at 6 o'clock," said the foreman. "Come back fifeteen minutes later and perhaps I may straighten out your account so that you will owe nothing."  The girl, hesitating between hope and fear, crossed the bridge as if to go homeward and then returned to the office.  The foreman was at the door, welcomed her within, and turned the key.  he assured her that he had helped many of the girls in the employ of the firm to balance their accounts after business hours.  Be that as it may, he had made a grave miscalculation in this case, and in less seconds than it takes to tell it he was glad he hadn't lost the key to the door.  The girl came directly to my house, told her story, and never returned to the tiger's lair.  Her case is but one of many, and if she adheres to her present decision it will be the particular one of many before the firm and the foreman hear the last of it.  Now come with me and we'll take a trip through the binderies and printing establishments, and before we get through I'll show you the fiend who endeavored to ruin this young girl.

Description:Nelson's undercover stories about working conditions for women in Chicago's factories continue. This article focuses on the city's printing companies, one in particular that the Health Department was investigating for the treatment of a female employee by a foreman. 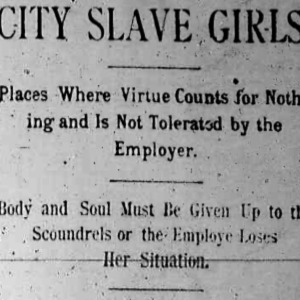 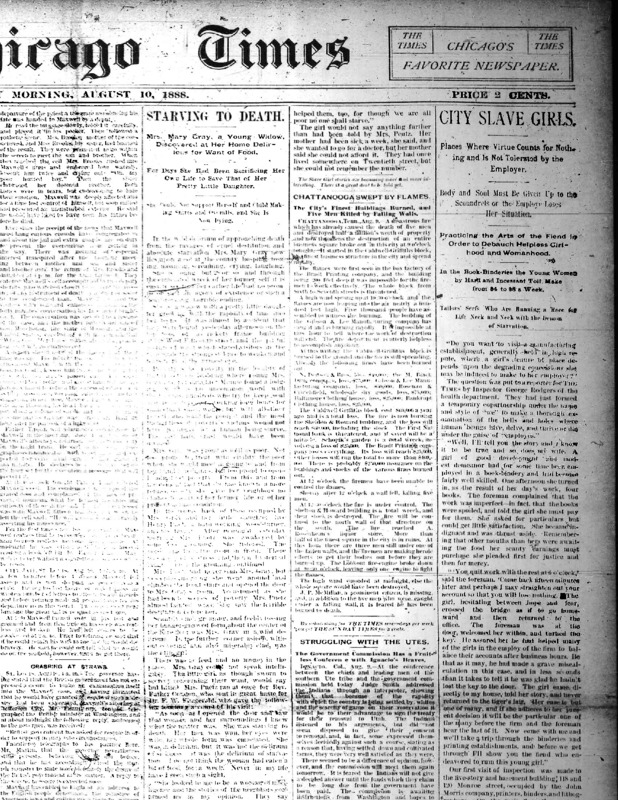