One of the white slaves of Chicago stood in the prisoner's dock at the armory police court yesterday moaning piteously.  She was young and her face was pretty.  The big policeman who stood at her side said he had arristed her for soliciting men upon the street.  She was booked as Kitty Kelly.  The frail, unfortunate girl brushed away her tears and told a story that went straight to the heart of every man in the crowded court room. She was a white slave and might have worn away her frail life sewing that her character should remain pure and unsullied, but the grinning skeleton of starvation haunter her day and night, and in desperation she sold herself to the tempter.  She was pale and thin and fierce hunger had left marks upon her young face.  "Oh judge I never did such a thing before! I never did it before! For God's sake have pity on me." and she wrung her hands in agony and sobbed convulsively.  "Nonsense," said the justice, trying to be stern. "You all say that."  "My baby! my baby! Oh what will become of her? For mercy's sake don't fine me! I have no money, not a cent.  Oh have mercy. I never was out before, surely I never was."  The big justice looked inquiringly at the big officer and the big officer said with a touch of emotion in his voice, "I never saw her before, your honor."  "Will you promise to keep off the street?" "I can't, no, I can't promise you that.  God knows I would if I could. But when I see my baby starving and there is no other way to find food for her, what else can I do?" and the wretched woman sobbed as if her heart was breaking.  The justice looked stern. Oh, sir," she sobbed, "If you only knew the misery and sorrow, the despair and degredation to which I have been humiliated, you might pity me.  I was young when I was married.  For awhile I was so happy. Then my husband sickened and died.  That was but little more than a year ago.  Soon after my baby was born.  I had no friend and no money. I was alone in this great city and no one to help me or even to give me a bit of advice. Vainly I sought for work.  I could not go into service and take my baby with me, and I could not bear the thought of parting from it.  At last I found employment in a factory.  There I made overalls and toled from morning until night, week in and week out.  But work as hard as I could, I could only earn $4 a week.  Baby took sick and I had to pay for a doctor and medicine, and it cost more than I could make."

Description:Nell Nelson gives the account of court room plea for mercy by a woman working in Chicago's garment industry. The article is part of an undercover series on working conditions for women in Chicago's factories. 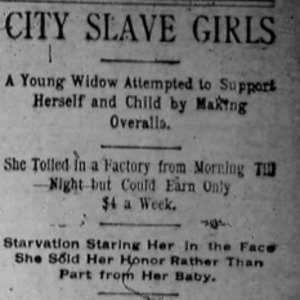 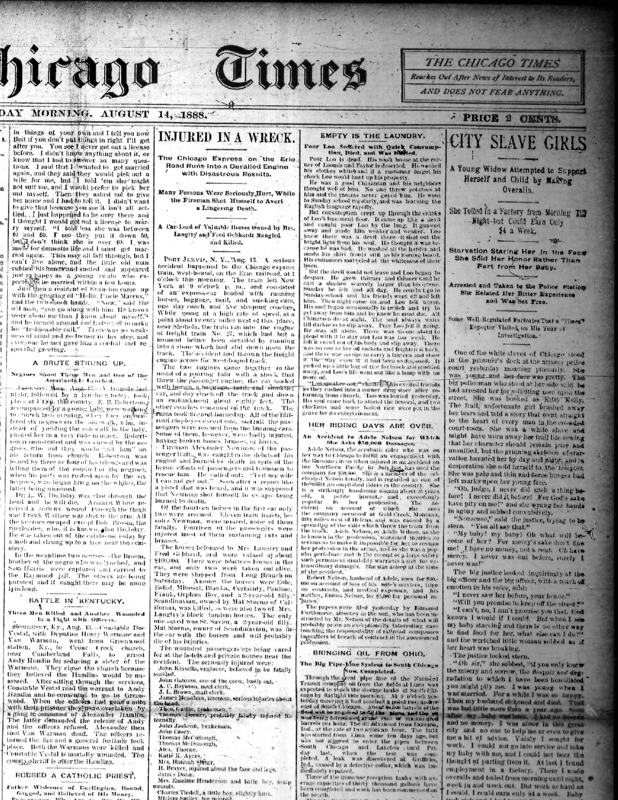